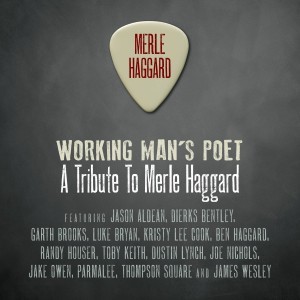 This is a great way to pay tribute to Merle, and at the same time, introduce his music to today's listeners. The songs are being sung by artists that new country music fans hear on the radio every day. Fans of Luke Bryan, Randy Houser, Joe Nichols and others will enjoy this album. While they are listening to some of their favorite artists, they will also have what might be their first opportunity to hear the great country music of Merle Haggard.

On April 6, the 49th annual Academy of Country Music awards will be broadcast live on ABC (8-11 p.m.). This year, Merle will be receiving the Crystal Milestone Award. Past recipients of this award include Garth Brooks, Kenny Chesney, Jason Aldean, Jennifer Nettles and Taylor Swift.

Luke Bryan and Dierks Bentley team up for Pancho and Lefty, the Townes Van Zandt song that Merle and Willie Nelson took to the top of the charts back in 1983. Jason Aldean took on two of Merle's hits from the early 80s, Going Where the Lonely Go and Are the Good Times Really Over. Randy Houser lends his powerful vocals to Ramblin' Fever and Misery and Gin. From the first song to the last, this album is everything you would expect it to be.

I can't imagine having a country music album collection without this Tribute to Merle Haggard being part of it. You get the best of both worlds with one. Today's artists delivering yesterday's hits. It's a good album, and it is going to spend a lot of time in my CD player. I think it will in the player of every country music fan as well.