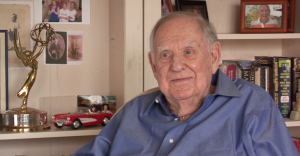 William Froug (May 26, 1922 – August 25, 2013) was an Emmy award-winning American television writer and producer. His producing credits include the series The Twilight Zone, Gilligan’s Island and Bewitched. In addition he wrote teleplays for The Dick Powell Show, Charlie’s Angels and The New Twilight Zone. He authored numerous books on screenwriting, including Screenwriting Tricks of the Trade, Zen and the Art of Screenwriting I and II, The Screenwriter Looks at The Screenwriter and How I Escaped from Gilligan’s Island: Adventures of a Hollywood Writer-Producer, published in 2005 by the University of Wisconsin Press.

William Froug was born in Brooklyn borough of New York City in May 1922 and placed for adoption through the Louise Wise agency there. Soon after he was adopted by William and Rita Froug of Little Rock, Arkansas where he spent his childhood before the family moved to Tulsa, Oklahoma (Froug’s Department Stores). He graduated from Little Rock Senior High School in 1939. The family home of Froug’s grandfather, Abraham Froug, has been preserved as a Historic Home and is located adjacent to the Governor’s Mansion in the Little Rock Historic District.

Froug attended, and graduated from, the renowned Journalism School at the University of Missouri, Columbia in 1943 before enlisting in the U.S. Navy. He was selected for the V7 Navy Officer Training Program at Columbia University and graduated as one of the “90 Day Wonder’s”. He served as an officer aboard a Subchaser stationed at Pearl Harbor before taking command of his own ship, USS PC800, in 1945 at Eniwetok Atoll.

For decades, Froug’s books were used as textbooks in film schools around the World. In, “The Ultimate Writer’s Guide to Hollywood”, the author, Skip Press, describes “Screenwriting Tricks of the Trade” as, “one of the best screenwriting books I’ve ever read” and in his “Top 10 Hollywood Reads”. He taught advanced screening writing courses in several countries in addition to colleges in Hawaii and Florida after his retirement. He found much joy in mentoring and was proud of the success of so many of his students.

Roger Ebert once wrote of Froug, ” I know an old writer. His name is William Froug, he lives in Florida and if you look him up on Amazon, you will see he is still writing brilliant and useful books about screenwriting and teleplays. He is not merely as sharp as a tack, he is the standard by which they sharpen tacks. If he had been advising the kid, the kid would have made a better movie, and if he had been advising the director of, “The Man in the Chair” we would have been spared the current experience. Just because you’re old doesn’t mean you have to be a decrepit caricature. One thing that keeps Froug young is that, unlike Flash Madden, he almost certainly does not sit on an expressway overpass guzzling Jack Daniels from a pint bottle”.

In 2011, Froug was selected as one of the Emmy Legends of Television by the Archive of American Television. His interview is available online at EmmyLegends.org

Bill Froug was a multi-talented, highly successful and creative presence across the many mediums of, Radio, Television and Film and an effective and talented educator and mentor during his years of teaching. He made a difference and a large contribution.