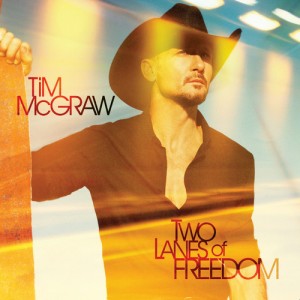 “Two Lanes of Freedom” is the title of Tim McGraw’s latest CD.  It’s been available for a while, so even if you don’t have a copy yet, you’ve probably heard some of the songs.  Already released as singles, “Truck Yeah”, “One of Those Nights”,  and “Highway Don’t Care”,  featuring Taylor Swift and Keith Urban, have been on the radio and on the charts the past few months.  ” Southern Girl” will be the fourth single released from this CD.

If you know country music and are familiar with the kind of songs we’re hearing on the radio these days, you will realize the first time they listen to “Two Lanes of Freedom”, that this CD has staying power.  In addition to the ones already released as singles, there are several more songs on the track list that will make good singles for Tim.

The songs you will hear on this CD include the title track, “Two Lanes of Freedom”, “Friend of a Friend”, “Southern Girl”,  “Truck Yeah”, “Nashville Without You”, “Book of John”, “Mexicoma”, “Number 37105”, “It’s Your World”, and “Highway Don’t Care”. The deluxe version of the album also includes the songs “Tinted Windows”, “Let Me Love It Out of You”, “Truck Yeah” (live version), and “Annie I Owe You a Dance”.  Tim’s music has changed over the years, but this album has just enough mention of fun and young love to take you back to the days when he put “Just to See You Smile”, “I Like It I Love It”, and “Something Like That” at the top of the charts.  While his music has gone through some changes, his vocals haven’t.  He’s always had a calming voice, and his fans are still hearing the sounds that drew them to his concerts decades ago.

One of my personal favorites is “A Friend of a Friend”.  I’m not sure if that is one of the ones he will ever release as a single, but I think he should.  This song is slow, and pretty much tells us everything Tim’s old girlfriend is doing, the way Tim heard it from a ‘friend of a friend.’  Tim McGraw has always been good at telling stories with his songs.  He continues that tradition with the songs on his “Two Lanes of Freedom” album.  “Nashville Without You” is a little too fast to be called a slow song, and a little too slow to be called a fast song.  The song, written by Kyle Jacobs (Kellie Pickler’s husband), Joe Leathers and Ruston Kelly, perfectly describes what Nashville would be like without that someone you want there with you.  This is definitely another one of my favorites on this album.

I definitely like the sound of “Mexicoma”, written by James T. Slater, and Brad and Brett Warren.  It is one of those songs that just makes you feel good.  It’s uptempo, and even though it is one of those songs about someone walking out of your life and you turning to a bottle of something with a high alcohol content, at a beach front watering hole, Tim manages to make it a fun song to listen to.

Most of today’s country artists bill themselves as singer/songwriter.  Time, however, seems to be content with singing what others have written. He did not write, or co-write, any of the songs on this album.  Josh Kear  is one of the writers on the song “Friend of a Friend”.  The other two who helped write that song are Mark Irwin and Andrew Dorff.  Josh also co-wrote “tinted Windows” and “Highway Don’t Care.”  In addition to his 12 studio albums, Tim has also released eight additional albums, with include Greatest Hits, Collector’s Editions, and a Tim McGraw & Friends album.  Tim’s fans probably have every album  he released, and I’m sure they will want to add this one to their collection.