The Coasters – An Exclusive Interview with Veta Gardner, wife of the late Carl Gardner (lead singer, owner, and a founder of the legendary band “The Coasters”) 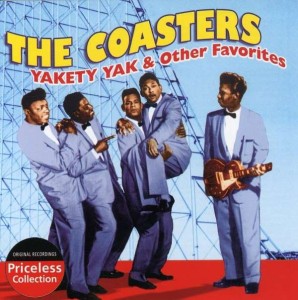 Veta Gardner sits down with Music Charts Magazine® and talks with us about her late husband Carl Gardner.  Carl’s life and his career with “The Robins” followed by “The Coasters” is a timeless part of music history.  We hope you enjoy this audio interview as much as we enjoyed doing it.  Veta is owner of “The Coasters” name.  She manages as well as books the current members of The Coasters.  Veta Gardner has written and published books including “Yakety Yak I Fought Back” and “Beyond The Dream”.  Veta Gardner’s newest book “Memories of You” is now available on Amazon.  With a heart full of love and laughter, Veta is a wonderful lady to speak with.

The Coasters are a doo-wop group that started in October 1955. The original members of the Coasters were Carl Gardner, Billy Guy, Bobby Nunn, Leon Hughes (who was replaced by Young Jessie on a couple of their early Los Angeles recordings), and guitarist Adolph Jacobs. Jacobs left the group in 1959. The Coasters’ were formed out of the group The Robins, a Los Angeles based rhythm and blues group, which included Carl Gardner and Bobby Nunn.

The songwriting team Jerry Leiber and Mike Stoller had started Spark Records, and in 1955 produced “Smokey Joe’s Cafe” for the Robins (their 5th single with Leiber-Stoller). The record was popular enough for Atlantic Records to offer Leiber and Stoller an independent production contract to produce the Robins for the Atlantic label. Only two of the Robins—Gardner and Nunn—were willing to make the move to Atlantic, recording their first songs in the same studio as the Robins had done (Master Recorders). In late 1957 the group moved to New York and replaced Nunn and Hughes with Cornell Gunter and Will “Dub” Jones. The new quartet was from then on stationed in New York (although all had Los Angeles roots).

The Coasters’ association with Leiber and Stoller was an immediate success. Together they created a string of good-humored “storytelling” hits that are some of the most entertaining from the original era of rock and roll. Their first single, “Down in Mexico,” was an R&B hit in 1956 and appears (in a re-recording from 1970—still with Gardner singing the lead) on the soundtrack of Quentin Tarantino’s Death Proof. The following year, The Coasters crossed over to the national charts in a big way with the double-sided “Young Blood”/”Searchin’.” “Searchin'” was the group’s first U.S. Top 10 hit, and topped the R&B charts for 13 weeks, becoming the biggest R&B single of 1957 (all these were recorded in Los Angeles).

“Yakety Yak” (recorded in New York), featuring King Curtis on tenor saxophone, included the famous lineup of Gardner, Guy, Jones, and Gunter, became the act’s only national #1 single, and also topped the R&B chart. The next single, “Charlie Brown,” reached #2 on both charts. This was followed by “Along Came Jones,” “Poison Ivy” (#1 for a month on the R&B chart), and “Little Egypt (Ying-Yang).”