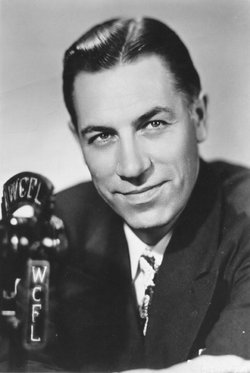 George Beverly Shea was a Canadian-born American gospel singer and hymn composer.  Shea was often described as “America’s beloved Gospel singer” and was considered “the first international singing ‘star’ of the gospel world,” as a consequence of his solos at Billy Graham Crusades and his exposure on radio, records, and television.

Shea himself has said that he became a Christian at the age of five or six, but made a re-dedication to Christ when he was 18:

There were times when I needed to rededicate my life to the Lord Jesus.  When I was 18, my dad was pastoring a church in Ottawa, and I was feeling not too spiritual.  The church was having a “special effort,” as they called it, for a week.  I remember that on Friday night Dad came down from the pulpit and tenderly placed his hand on my shoulder.  He whispered, “I think tonight might be the night, son, when you come back to the Lord.”  Whatever Dad did or said, I listened to him and respected him.  And, yes, that was the night!

Shea accepted Christ again as his Saviour at the Sunnyside Wesleyan Methodist Church in Ottawa, Canada.

During his career, Shea was nominated for ten Grammy Awards, winning on March 15, 1966, the 1965 Best Gospel or Other Religious Recording (Musical) for his album “Southland Favorites” (RCA LSP-3440) recorded with the Anita Kerr Quartet.