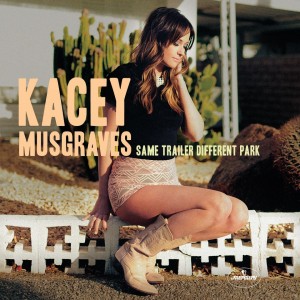 People who watch what we refer to as reality television might remember Kacey Musgraves from the former USA Network show, Nashville Star. Kacey was a contestant during Season Five, back in 2007, and finished in seventh place. Recently, however, she caught the attention of country music fans with the release of her debut single, “Merry Go ‘Round.” It’s not just listeners who like what they are hearing from Kacey, it is the program directors and station managers at the top country music radio stations nation-wide. Her single is sitting in the No. 11 spot on country music’s Top 40 Chart, and Kacey is ready to introduce the world to more of her music music, with the release of her first album.

Available in now, the new album is titled “Same Trailer, Different Park”, which incidentally is a line from her current single, Merry Go ‘Round. While today is the official release date for the CD, I had the pleasure of listening to this album a few weeks ago. And I don’t mind telling you, I listened more than once.

Kacey co-wrote all of the songs on the new album, which was produced by Shane McAnally. The 12 songs on the debut album are: Silver Lining, My House, Merry Go ‘Round, Dandelion, Blowin’ Smoke, I Miss You, Step Off, Back on the Map, Keep it to Yourself, Stupid, Follow Your Arrow, and It Is What It Is. While a few of the songs remind me of something I just heard on the album, every one of them is unique in its own way. From the story it tells to the melody and instrumentation, there is something unmistakeably ”Kacey’ in everything “Same Trailer, Different Park” has to offer.

The songs on this new album are mostly what I could call ‘mid-tempo’. They aren’t super fast, and they aren’t ballads either. “Stupid” is one of the fastest. And oddly enough, it’s my least favorite of the 12 tracks. That said, I really like “Follow Your Arrow,” and it’s also a little faster, so my problem isn’t with fast vs. slow here. I am certain that every country music fan who hears this album is going to enjoy what Kacey has done with it. When I got done listening to the album for the first time, it left me wanting to see Kacey Musgraves in concert. So, if that was one of the goals of the CD – goal accomplished!

This 24-year-old Texas native is a real story-teller. Whether it is the waitresses in the diner talking about bigger dreams in “Blowin’ Smoke,” or descriptions she gives of seeing the world from inside her mobile home in the song, “My House,” there is a story being told that everyone is going to want to hear. She has a way of telling us how she sees life using words that most of us would not think of, but yet we understand exactly what she’s talking about. It takes a special talent to find the right words to express their thoughts, and be able to create a feeling. Kacey Musgraves can do that. The words tell stories, the melodies are catchy, and every time one song comes to an end, you are anxiously waiting for the next one to begin.

I don’t think there’s much in life that Kacey has missed. Not much she hasn’t noticed. She reminds me of a person who could ask how you do something, just as easily as she could tell someone ‘that’s how it’s done.’ I don’t have to know her to know that I like the way she seems to look at life. Everything she has ever seen or done seems to come through in her music.

Kacey has been busy throughout her career. She has already been on tour with Lady Antebellum, and she wrote “Mama’s Broken Heart” for Miranda Lambert.  She is nominated for Top New Female Artist, Top Female Vocalist, and Music Video of the Year-Merry Go ‘Round, at the 2013 Academy of Country Music Awards, which will be televised live on Sunday, April 7, at 8 p.m. on CBS.

Currently on tour with Kenny Chesney, Kacey has a calendar full of upcoming shows that you can view when you visit her web site http://www.kaceymusgraves.com/. You can also follow her on Twitter @KaceyMusgraves. Be sure to visit Country’s Chatter, too, where you can find all the latest news from Nashville, view videos, and even enter contests to win CDs, t-shirts, and other great prizes from up-and-coming artists, as well as some of biggest names in country music. The web address is http://www.countryschatter.com , and follow us on Twitter @countryschatter.