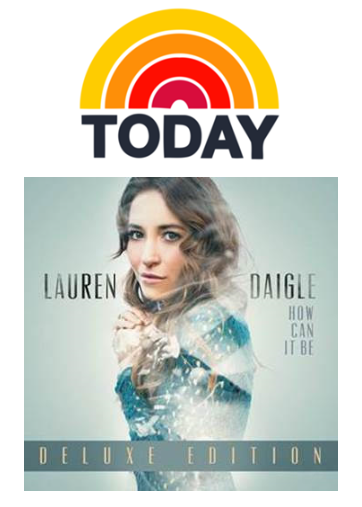 Award-winning Centricity Music artist, Lauren Daigle will perform live on NBC’s “TODAY” show August 2nd at 10:45am ET.  Following her “TODAY” show segment, Daigle will hold a special in-store appearance at The Shop at NBC Studios at New York’s 30 Rockefeller Plaza. Daigle will meet fans, sign autographs and take photos with attendees in support of the recent release of the deluxe edition of her debut album, HOW CAN IT BE.

HOW CAN IT BE, the album, logged more than five weeks at #1 on Billboard’s Top Christian Albums chart, and premiered in the Top 30 on the Billboard 200. It also reached #1 on the iTunes Christian Gospel Top Albums Chart with more than 360,000  album sales and 880,000 track sales, positioning her as the fastest-selling new artist in Contemporary Christian music in the past decade. Daigle has had more than 90 million YouTube and Vevo views, with approximately 300,000 subscribers.

Check out the following Lauren Daigle links for more information: