He joined the Louisiana Hayride 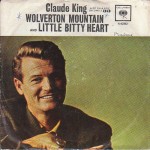