Cliburn made a guest appearance in the cartoon Iron Man 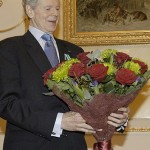