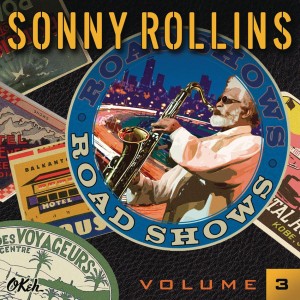 Some superior Sonny Rollins performances have been made available in recent years as a result of his decision to release selections from concerts on his own label, Doxy. The first CD appeared in 2008, and the second three years later; the third has just been issued on OKeh, sixty-five years after his initial recording (with Babs Gonzales) in 1949. His desire to circulate this worthwhile music as he ages (he was born in 1930) is understandable; it is also cause for celebration.

Recorded in France, Japan, and St. Louis, the six selections come from 2001, 2006, 2007, 2009, and 2012 (two). At over fifteen and twenty-three minutes, respectively, the standards “Someday I’ll Find You” and “Why Was I Born?” are the longest ones. (Could some of the former, a Noel Coward composition, have influenced Thelonious Monk when he was writing “Ask Me Now”?) Two Rollins originals are familiar (“Biji” and “Don’t Stop the Carnival”), while he wrote “Pantanjali” only recently. A curiosity, “Solo Sonny” is more a melange than a unified whole.

Though all of Rollins’s recordings are worth hearing, even the least inspired ones, the music on Road Shows, Volume 3, which is of almost uniformly high quality, supports the view that Rollins usually plays better in live performances than on studio recordings. Aided by effective rhythm sections, his rhythmic drive is impressive on “Biji,” “Don’t Stop the Carnival,” “Pantanjali,” and “Why Was I Born?” He plays only “Someday I’ll Find You” relatively slowly. His tone is as full bodied and attractive as ever. His inventiveness never flags. Though the other soloists (trombonist Clifford Anderson, pianist Stephen Scott, and guitarists Bobby Broom and Peter Bernstein) are adequate, they are largely of incidental interest; they mostly fill time as the high-energy leader rests and recharges. He is the main attraction.

I find two aspects of this release irritating. One is “Solo Sonny.” Played without accompaniment, it consists entirely of quotations from familiar tunes that lack any obvious connection. Its presence on this CD indicates Rollins’s approval of it, and many listeners will probably consider it a highlight, going so far as to attempt to identify all the compositions from which Rollins quotes. Yet it strikes me as a stunt, an exercise appropriate for a practice session, not a concert. I wonder why Rollins values “Solo Sonny” and decided to release it instead of something else from among the hours of unissued concert performances to which he doubtless has access.

That these performances deserved enthusiastic audience response is obvious, but too much of it is retained on this CD. The applause totals five minutes, time that could have been given to the inclusion of another musical selection. People listening to this release more than once at a single sitting will have to endure two full minutes of applause between the end of the final selection and the beginning of the music on the first one. Around forty seconds of clapping typically separate tunes, applause that, in linking one piece to another, creates the impression that the selections were played in sequence at the same concert. Nothing would have been lost, and something would have been gained, from significantly reducing the amount of audience response to Rollins’s playing. This sublime music does not need the validation implied by excessive applause.

These reservations aside, the third volume of Road Shows is a major addition to the rich recorded legacy of Sonny Rollins. I hope he will release, or permit others to release, additional concert material of similar quality.