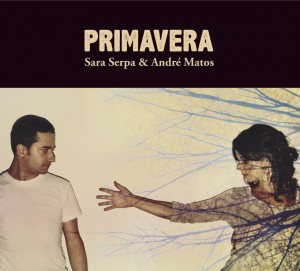 Despite recording initially in 2008 and appearing on CDs by the likes of André Matos, Greg Osby, Vardan Ovsepian, and Danilo Perez, Sara Serpa is little known. She performs mostly unfamiliar material, is more concerned with sound than lyrics, and possesses a relatively thin voice. While her music appeals to some adventuresome musicians, listeners open to singing that is both experimental and accessible would also likely find it engaging.

Ran Blake is both a bold musician and a keen listener. Her mentor at the New England Conservatory of Music, from which she received a degree in 2009, he was so attracted to her singing that he recorded two CDs of duets with her, Camera Obscura (2010) and Aurora (2012). (A review of Aurora is available at http://www.musicchartsmagazine.com/sara-serpa-ran-blake-aurora-jazz-album-review-by-benjamin-franklin-v/.) Though Serpa is a significant presence on these releases, Blake dominates: not only did he select most of the material, but he plays piano in his typically idiosyncratic, attention-grabbing manner.

The music on Primavera, which Serpa performs with Portuguese guitarist André Matos, is notably different from that she recorded with Blake. Contrasting the duos may be done easily by listening to their versions of the same song. The tune is Blake and Jeanne Lee’s “Vanguard,” which she sings with Blake on Camera Obscura. Blake’s accompaniment is heavier and more dissonant than Matos’s, though the guitarist’s concluding notes are inharmonious, apparently as dictated by the composition. While much of Serpa’s singing on these recordings is similar, she is more daring with Blake than Matos. For example, when she sings the words (which I cannot understand) immediately before “new reason, feelings of envy and blame” with Blake, her expansive range generates drama, while with Matos her vocal scope with these words is limited and excitement is therefore lacking. Her interaction with Matos, though, seems more natural than her collaboration with Blake.  This is not to say that Serpa’s music with one of her associates is superior to that with the other; the sounds are just dissimilar, as one would expect from groups that feature improvisation and different instrumentation.

Of the fourteen selections on Primavera (all but two are under four minutes in length), Serpa sings six wordlessly, five in Portuguese (her native language), and three in English. I find her wordless ones most effective, partly because I am unfamiliar with Portuguese and cannot comprehend some of her words sung in English. Yet her wordless vocalizing is not scat, as commonly understood. Instead, it functions as an instrument, creating both melody and harmony. She sings in harmony with Matos’s guitar, but also with herself through overdubbing, a technique that can easily be discerned on Matos’s “Tempo,” which is played slowly. In a few instances, harmony (and texture) is enhanced by the inclusion of instruments other than guitar, as when guests Leo Genovese and Greg Osby perform on melodica (on Matos’s “Rios”) and soprano saxophone (on Matos’s “Choro”), respectively.

Though the music of Serpa and Matos might not appeal to listeners content with mainstream culture, it probably would reward those who welcome exposure to challenging but not forbidding sounds.