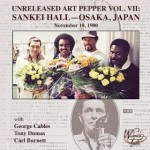 Laurie Pepper, the saxophonist’s widow (hence, the name of the label), continues issuing previously unreleased material by her husband.  Because Art Pepper’s career is well documented on record, one might wonder if additional releases are warranted.  Yes, they are, primarily because Pepper was a major figure.  He must have played some forgettable music along the way, but Widow’s Taste has so far released only music than enhances his considerable legacy.

This new two-CD set documents a 1980 concert that the audience obviously enjoyed.  Backed by pianist George Cables, bassist Tony Dumas, and drummer Carl Burnett, Pepper plays magnificently throughout, whether the tempo is blistering (“Straight Life”), deliberate (“Over the Rainbow”), or medium (“Landscape”).  Always lyrical, his playing occasionally reflects the oft-noted influence of John Coltrane, especially on up-temp pieces.  This is true on “Cherokee,” for example: he distorts notes and plays notes at the upper limit of the alto saxophone, thereby adding intensity to his already impassioned music.

This release disappoints only because “Straight Life” ends abruptly, without resolution, probably because of an inadequate supply of tape at the concert.  Laurie Pepper explains that she had to decide whether to include this incomplete performance on this CD.  I believe she decided correctly.

A few extra-musical issues deserve comment.  Pepper introduces “Ophelia” by saying that it constitutes his attempt to describe women.  Does he mean that it is a programmatic composition?  Whether he succeeds in musically describing women strikes me as irrelevant. It’s a lovely performance.  Laurie Pepper proclaims that “George Cables’s character shines through every note he plays.”  I do not know Cables, but, from hearing him play, I have no sense of his character.  Perhaps this is my fault.  Finally, Laurie Pepper seems to settle scores with Milcho Leviev, Art Pepper’s previous pianist, and Tony Dumas.  While frankness is often admirable, her comments seem inappropriate in the context of this statement she makes about her husband:  “He emphasized the importance of being courteous and compassionate.”

These are quibbles.  What matters is Art Pepper’s music, which is masterful.