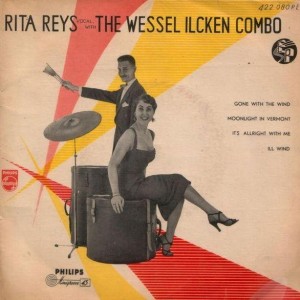 Reys was born in Rotterdam in 1924 into an artistic family. Her father was a violin player and conductor, her mother a dancer. At home, there was virtually no jazz music. Her parents preferred light classical music, so Rita grew up with the sounds of Tchaikovsky and Chopin.  As a teenager, Rita nonetheless entered and won many local talent competitions.

In the Netherlands, Rita started to perform more regularly with the trio of pianist Pim Jacobs, whom she already knew from his playing with Wessel.  After a show in the city of Groningen, during the drive back home in a minivan, he suddenly proposed to her, while guitarist Wim Overgaauw and Pim’s brother, bassist Ruud Jacobs, were sleeping in the back. Their “marriage in jazz” even made news headlines.  On their wedding day, the mayor of Hilversum (one of the Dutch music ’headquarters’) presented the happy couple with the first copy of their album Marriage in Modern Jazz (the album that would win Rita her first Edison award).

That same year, Rita and the Pim Jacobs Trio won the Juan Les Pins Jazz Festival in France, where Rita was named Europe’s first lady of jazz, a title she would carry with grace for the rest of her career.  The 1960s ended with one of the greatest high points in Rita’s career: in 1969 she was the first Dutch jazz singer to perform at the New Orleans Jazz Festival, where she played with, among others, Zoot Sims and Milt Hinton, accompanied by Pim on piano.   She became a Citizen of Honor of New Orleans in 1980.