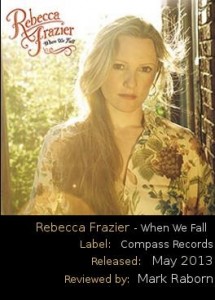 Rebecca Frazier’s new CD “When We Fall” features twelve tracks, of which ten are original compositions including three instrumentals.

The project is superbly supported throughout by a strong producer and by a stellar cast of musicians that largely need little introduction, including Ron Block and Scott Vestal on banjo, Barry Bales on bass, Shad Cobb on fiddle, Andy Hall on resonator guitar and husband John Frazier on mandolin. Rebecca plays guitar on all cuts.

My initial observation was to simply admire and enjoy the fidelity of the recording, followed closely by the quality of the arrangements and the overall maturity of the presentation and musicianship. However, after hearing a few cuts I was convinced that Rebecca, in addition to being a superb vocalist and lyricist, is a masterful flat-pick guitar player, playing with a level of imagination, taste and authority that will awe many of her listeners, as well as her peers.

I found the overall tone of this project to have a ‘modern,’ post-Monroe acoustic Bluegrass texture with the occasional influence of cross-cultural Bluegrass genres like Blues and Country interwoven. Without transgressing the artistic boundaries that define modern Bluegrass, Rebecca’s title cut, “When We Fall” sounds like it could easily be transformed to Top 40 Country material. That’s not to say that she should seek Country “hit” status for this composition, but rather an acknowledgement that it is ‘that good’. The overall arrangement, insightful lyrics and the smooth timbre of her voice bring this piece to life and nurture it to maturity. The result is a track that most any female Country music superstar might envy.

Likewise, the more up-tempo “Morning and Night” and “Darken Your Doorway” possess the artsy magic that many listeners identify with and look forward to hearing again and again. Both are richly “musical” and interesting, without being overly predictable or exotic. Rebecca’s seemingly-effortless lead vocal work combined with subtle, but beautiful harmony placements, catchy lyrics and tasteful accompaniment make these songs among those that her fans will look forward to hearing over and over.

“Love, Go Away From This House” underscores Rebecca’s songwriting prowess, as well as her vocal range as she ventures into more bluesy fare. The feel is tastefully accented with fills by John Frazier on mandolin, Andy Hall on resonator guitar, Shadd Cobb on fiddle, as well as her impeccable guitar work.

If you enjoyed and would like to read the rest of this review please click this link and get your daily Prescription Bluegrass: http://prescriptionbluegrassreviews.blogspot.com/2013/05/mark-raborn-reviews-rebecca-fraziers.html