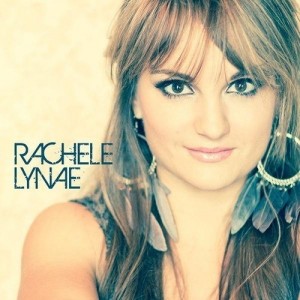 I wasn’t familiar with Rachele Lynae until I listened to her self-titled debut album. When I started listening, I immediately headed over to her web site to read her bio, and find out a little more about her. She grew up in Kodiak, Alaska, and started singing at a very early age. By the time she was 10 years old she had already been singing in church for five years. She started writing songs when she was 12, and at age 17 she started doing live shows, and building a reputation as a ‘riveting live performer’.

She moved to Nashville to attend Belmont University. That is a great music school, and is also where Josh Turner, Trisha Yearwood and Brad Paisley went to school. Rachele has been performing at Nashville’s famous clubs, and recorded a five song EP, which shared with Jimmy Murphy – who shared it with his daughter, Jamie O’Neal. That was all it took.

Jamie and Rachele began working on the new album. Rachele co-wrote every song on the album, Jamie produced it. Four of the songs even had Jamie in that ‘co-writer’ seat.

“Done is Done” was written by Rachele and Luke Sheets. The title pretty much tells you what to expect from the song. Someone is about to get their heart broken. Someone is leaving. What is “Done is Done”. There aren’t any surprises with this song, and yet it was one of my favorites. Her vocals, which are so strong and so powerful in some of the faster songs, actually have a softer side. Even when Rachele slows things down, she still has perfect control, and perfect tone. And she still makes you want to see her on stage.

By the time I got to the end of the album, I realized I had a lot of favorite songs. Leading the pack for me are  “Done is Done” and “Sometimes You Fly,” but if they don’t end up being your favorites, no need to worry! You are definitely going to find a lot you like among the 12 songs on this CD. The first song very much falls into the category of ‘country/pop’, and is very much like a lot of the songs you hear on today’s Top 40 stations.  It is an upbeat song, and I can’t imagine Rachele being able to stand still and sing that one.

The second song, “Words in Red” gave her a great opportunity to showcase her vocals. With a title like “Cigarette” I wasn’t really sure what to expect from this song. But it’s a great song. I think we will all understand the lyrics, and I think most of us have probably been there at one time or another. The song is about regret.

I don’t know what Rachele plans on releasing as a single, but if I were asked, I would to point to “Clean”. This song made me think about growing up’’; about my family; getting hurt as a kid; Mom always being ready with warm, soapy washcloth; church; leaving home; and, coming back. All that in addition to the fact that it is a beautiful song, being sung by an artist with a beautiful voice. This song, more than any of the others on this album, sounds ‘country’ to me. It isn’t country/rock, or country/pop, or country/soul, or country/blues, or country/jazz … it is country.

“Old Fashioned Love” is another great ballad. I like songs that have memorable lyrics. After listening to the album three times, I found myself singing along with this one – and actually waiting for it to come around again.
Regardless of your taste, you are going to find music on this CD that you like, and you will find music that will make you want to sing, dance, tap your feet, close your eyes and relax, think back, and play again.
To learn more about Rachele, visit her web site at www.rachelelynae.com. You can also follow her on Twitter @Rachele Lynae. Keep up with all the latest country music news at www.countryschatter.com, and follow us on Twitter @countryschatter.​