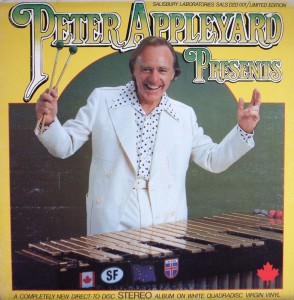 Peter Appleyard, (OC) (26 August 1928 – 18 July 2013) was a British–born Canadian jazz vibraphonist, percussionist, and composer. He spent most of his life living and performing in the city of Toronto where for many years he was a popular performer in the city’s nightclubs and hotels. He also played and recorded with many of the city’s orchestras and been featured on Canadian television and radio programs. In the early 1970s he drew wide acclaim for his performances with Benny Goodman’s jazz sextet with which he toured internationally. In 1992, he was made an Officer of the Order of Canada in recognition of his being an “internationally renowned vibraphonist [who] has represented the Canadian jazz community across North America, Europe, the Middle East and Australia”.

Born in Lincolnshire, Appleyard became apprenticed to a nautical instrument maker after being forced to leave school owing to economical reasons related to the Second World War. At that time the popularity of the American Big Bands was growing in England, particularly through a major influx in big band recordings from America by jazz musicians like Benny Goodman, Duke Ellington, and Count Basie. These recordings had a strong influence on Appleyard and he decided to pursue a career as a jazz musician. He began his career in the early 1940s playing in the Boys Brigade, a youth organization. He performed as a drummer in several other British dance bands during the 1940s and, while a member of the Royal Air Force during in the mid-1940s, played in RAF bands.