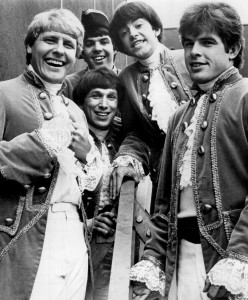 Paul Revere & the Raiders was an American rock band that saw considerable U.S. mainstream success in the second half of the 1960s and early 1970s. Among their hits were the songs “Kicks” (1966; ranked number 400 on Rolling Stone magazine’s list of The 500 Greatest Songs of All Time), “Hungry” (1966), “Him Or Me – What’s It Gonna Be?” (1967) and the Platinum-certified classic #1 single “Indian Reservation (The Lament of the Cherokee Reservation Indian)” (1971).

Paul Revere has a style: a sixth sense for pleasing an audience. The magic chemistry of his personality has been a major factor in the Raiders’ rise to popularity; and not by sheer accident. He has created, over a period of time, a highly polished act built on warmth and spontaneity.

Paul has a knack for finding the finest talent and personalities to keep his group a top entertaining act year after year.

Push play on the player below, sit back, and enjoy listening to this wonderful audio interview with award winning DJ Jimmy Jay and the legendary Paul Revere of “Paul Revere and The Raiders”.  Paul Revere (January 7, 1938 — October 4, 2014) will be missed and never forgotten.  Listen as he tells about stories of his life, career, and the places he’s been and seen.  Many thanks to DJ Jimmy Jay from the radio show “Rewind” www.RewindShow.com for allowing Music Charts Magazine® fans to hear this.

Paul Revere organized the Raiders in 1958 in Idaho. A few of the highlights of Paul Revere’s
outstanding career are:

During their career Paul Revere and The Raiders also had 23 consecutive hit singles!
Some of which include: