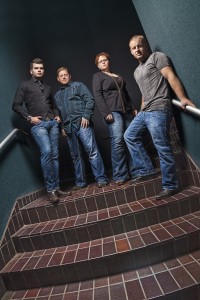 Push play and listen in as Big Al Weekley and Carolyn Routh discuss the new release of Nu-Blu’s new Album “All The Way”.

“With this new project we are going all the way by stepping outside of genre boundaries and letting our fusion of musical tastes and interpretations guide us like never before,” says lead singer Carolyn Routh.

To step out and decide to make a living in music takes a tremendous leap of personal and professional courage. For Daniel and Carolyn Routh, however, the husband-and-wife team that founded Nu-Blu, it became a necessity, the way to maintain the life-giving force of their music. Today, even as they continue to grow and reach loftier and bigger goals, they have reason to celebrate: the release of their new project, All The Way, released through Rural Rhythm Records. The album is fueled by the George Jones inspired song “Jesus and Jones,” which has gained attention and exposure nationally across multiple genres.

Nu-Blu, based in Siler City in central North Carolina, is comprised of Carolyn, who handles bass and vocals; Levi Austin on vocals and banjo; Austin Koerner, on mandolin; and Daniel, who is the band’s Renaissance Man – guitarist, singer, manager, and tour coordinator, among many other roles. The group brings its lively and entertaining version of Americana-bluegrass music to audiences across the nation year-round. Their sound acknowledges the traditional institutions that have shaped it, yet is innovative and daring enough to bring a fresh sparkle to contemporary acoustic music that lands them squarely in the forefront of bands blazing the trail in acoustic entertainment. Influences range from the sounds of original bluegrass pioneers like Earl Scruggs, Jimmy Martin and Lester Flatt to rock bands of the 1980’s, and modern contemporary sounds such as Alison Krauss and Union Station. Carolyn’s soprano vocal approach might be described as similar to Ms. Krauss, except she carries a phrasing and emotional elegance that shows a clear originality. Daniel and Levi provide inventive singing to fill out the vocal sound, while all four members present instrumental prowess to impress.

Nu-Blu started back in September 2003 after Carolyn and Daniel, who had played for years in different genres both 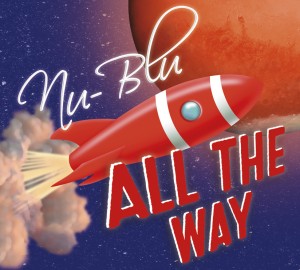 separately and together, decided to devote their efforts to forming Nu-Blu. Despite challenges that included numerous personnel changes, the folding of their original record label, and even a stroke that left Carolyn unable to speak or move her right side, the Rouths were determined to make Nu-Blu a full-time vehicle for them to bring music to their fans.  With the addition of Levi in 2007 and Austin in 2011, the magical sound of Nu-Blu was complete, and as the group continues to build a national fan base, audiences are listening.  The band is finding itself more and more at home on the radio charts, most recently with the evocative “Jesus and Jones.” The stage is now set for the group to continue its chart trend with the songs from All The Way.

What’s ahead for Nu-Blu? Plenty, you may believe that. Every year, the band logs more miles on the road than the year before, plays more shows than the year before, sleeps more nights on the bus than the year before. But for Daniel, Carolyn, Levi and Austin, it’s not a chore, it’s a way of life. It’s not slogging from one venue to the next, it’s another opportunity to touch their audiences’ lives with music, that great universal bond which closes the gaps of humanity and brings lightness to hearts, smiles to faces and redemption to souls.

“If we can touch somebody on a deep level,” says Daniel Routh, “and create a moment for them that they always will remember and entertains them, that’s gold. If we can say to someone,‘Hey, check this out. If you like this, you’re probably going to like bluegrass!”  Really that’s why we’re here.”