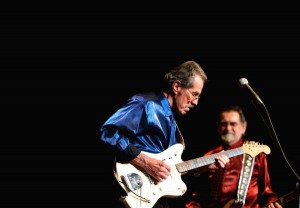 Billed as Jimmy Gilmer and the Fireballs, the group reached number 1 on the Billboard chart with “Sugar Shack”, which remained at that position for five weeks in 1963.

“Sugar Shack” earned the group a Gold Record Award for “Top Song Of 1963”.

It was a privilege and honor to have George Tomsco of The Fireballs do this audio interview with us.  When you say hello to George on the phone and ask him how he is, he will reply “One step above marvelous.”  I think that best describes George.  George Tomsco of the legendary Rock music group The Fireballs is “one step above marvelous.”  ~ Music Charts Magazine®

The FIREBALLS of Raton, were the 1st rock & roll recording band from New Mexico :

(a) To become internationally known for their instrumental recordings of “Fireball” “Torquay” “Bulldog” “Vaquero” “Gunshot” “Quite A Party”…
(b) To have a #1 vocal song “Sugar Shack” in Billboard Magazine…
(c) To retain the #1 position for 5 weeks in a row…
(d) To have the largest selling single recording of all recordings released in the USA for a one year period, 1963, certified by RIAA (Recording Industry Association of America)…

‘For the record’, the Fireballs still hold the record !!
None of the above have been surpassed by any other rock & roll
recording band from New Mexico to date.

History of The Fireballs

Arriving on a Sunday afternoon for their audition, Petty acknowledged his interest in their basic style, simplicity, and feel in which the group performed their original guitar instrumentals and vocals penned by members George Tomsco and Chuck Tharp.

Buddy Holly and the Crickets were scheduled for nightime recording sessions Monday and Tuesday, so Petty logged the first Fireballs session for Wednesday night. 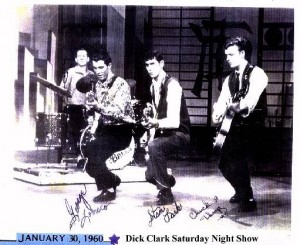 January 1959 found their first record released on KAPP records. “Fireball“, a guitar instrumental; and “I Don’t Know“, a vocal by Chuck Tharp. “Fireball” was the Billboard ‘pick’ which resulted in the first airplay and sales.

Petty soon negotiated a contract for the group with a new aggressive British based label in the US, TOP RANK records. As a result more chart instrumental singles and albums followed: “Torquay“, “Bulldog“, and “Vaquero” which led to two appearances on Dick Clark’s American Bandstand shows. January 4, 1960 featured them performing “Bulldog”, and on June 23, 1961 they performed “Quite A Party”. They later appeared on Clark’s Saturday Night show, as well as various other national and regional shows.

WARWICK records released additional singles which included “Quite A Party“, and an album.

Little did the Fireballs know by now that their guitar instrumental music was one of the foundational influences of the Surf music culture that was starting to make big waves.

Coupled with a new vocalist, Jimmy Gilmer, the Fireballs savored success in a new dimension. “Sugar Shack” on DOT records was a #1 hit and the largest selling single of the year. More vocal singles and albums followed. It was a very unique transition in the music business for an ‘instrumental guitar band’ to become ‘vocal’ and retain prestige in both fields.

Besides their own recordings, Petty recruited the Fireballs as studio musicians for other recording artist projects. Among many, folk singer Carolyn Hester and Arthur Alexander. It was during this time that Petty orchestrated the group through the task of musically enhancing the Buddy Holly ‘apartment tapes’ which surfaced after Holly’s death.

The late 60’s found the Fireballs on ATCO records with more chart singles and albums. Gilmer’s gutsy lead vocal along with the backup vocals from the Fireballs sang their way to another top 10 tune with “Bottle Of Wine” followed closely by “Come On React“, of which albums were released under each of the titles.

Their Current recordings of traditional 50’s/60’s style guitar instrumentals, vocals, and their own brand of country-rock music reflect trace influences of Mexican and ‘western’ music dominant in the Southwest prior to the start of their recording career.

Fireballs recordings and songs are heard in the soundtracks of the following films: Forrest Gump , Mermaids , Congo , Dogfight , From Dusk Till Dawn , Box Of Moonlight , The Real Blonde, with others being negotiated for upcoming films. 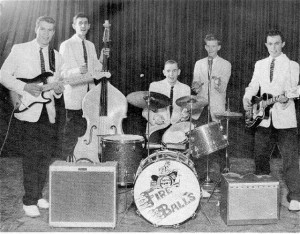 July 28, 1989 the Fireballs were inducted into the Norman Petty Studio Walk Of Fame by Vi Petty, and headlined the show that evening at the Petty’s Main Street Theatre in Clovis, New Mexico.  Three original members performed : Chuck Tharp- vocal & guitar ,  Eric Budd – drums and George Tomsco – lead guitar . Standing in for original bass player (Stan Lark) was Fireball’s historian Jerry MacNeish on bass.
The Fireballs performed at the Nebraska Music Hall Of Fame induction ceremonies in Lincoln, Nebraska in 2000.
On August 29, 2001, The Fireballs were inducted into the West Texas Rock & Roll Walk Of Fame in Lubbock, TX. Members present were George Tomsco, Stan Lark, Eric Budd, Chuck Tharp & Jimmy Gilmer – all performed together at the Texas Tech Stadium that evening.

With their well established track record, the Fireballs are a class act of the 50’s / 60’s music era into the year 2000 and beyond of entertainment.

The Fireballs, sometimes billed as Jimmy Gilmer and the Fireballs, were an American rock and roll group, particularly popular at the end of the 1950s and in the early 1960s. The original 1958 line-up was: George Tomsco (lead guitar), Chuck Tharp (vocals), Stan Lark (bass), Eric Budd (drums), and Dan Trammell (rhythm guitar).

The Fireballs were formed in Raton, New Mexico, and got their start as an instrumental group, featuring the very distinctive lead guitar of George Tomsco. They recorded at Norman Petty’s studio in Clovis, New Mexico, where Buddy Holly had previously launched his career. According to group founders Tomsco and Lark, they took their name from Jerry Lee Lewis’s “Great Balls of Fire.” They reached the Top 40 with the singles “Torquay” (1959), “Bulldog” (1960) and “Quite a Party” (1961). “Quite a Party” peaked at #29 in the UK Singles Chart in August 1961. Tharp, Budd and Trammell left the group in the early 1960s, but the Fireballs added Doug Roberts on drums, plus Petty Studio singer/pianist Jimmy Gilmer (born September 15, 1940 in Chicago and raised in Amarillo, Texas) to the group.

Billed as Jimmy Gilmer and the Fireballs, the group reached number 1 on the Billboard chart with “Sugar Shack”, which remained at that position for five weeks in 1963. The single also reached number 1 on Billboard’s R&B chart for one week in November of that year, but its run on that chart was cut short because Billboard ceased publishing an R&B chart from November 30, 1963 to January 23, 1965. Nonetheless, “Sugar Shack” earned the group a Gold Record Award for “Top Song Of 1963”. In the UK the song peaked at #45. Jimmy Gilmer and the Fireballs then had another pop hit in 1964 with a similar sounding “Daisy Petal Pickin'”, which reached number 15 on the Hot 100.

During the run of “Daisy Petal Pickin'” on the charts, the British Invasion began with the first hits by the Beatles. The group had difficulty competing with the influx of British artists and did not reach the Top 40 again until 1968, with “Bottle of Wine”, which was written by Tom Paxton. The Fireballs took “Bottle of Wine” to number 9 on the Hot 100. Although Gilmer was still a member of the group, the band was billed simply as “The Fireballs” on that single. Gilmer left the group in 1969 to pursue artist management and record production in Nashville, Tennessee. Drummer Doug Roberts died in 1981.

All of the Fireballs’ material has been reissued on Ace Records (UK) and Sundazed record labels. The Fireballs continued performing with original members George Tomsco, Stan Lark and Chuck Tharp until Tharp died of cancer in 2006. Jimmy Gilmer returned as lead vocalist and this line-up continues to perform, as of 2014. George Tomsco has continued to release CDs of new material using the Fireballs name.