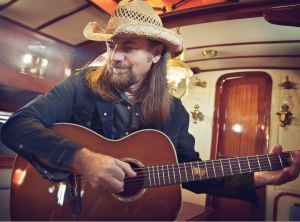 Check out this Music Charts Magazine® “NEW DISCOVERY” Interview with “Mike Aiken” and be prepared to be excited knowing there is still 100% awesome music out there that you still have not heard.

After you listen to this great radio interview pasted below of “Mike Aiken” we are sure you will be glad you found this “New Discovery” and Mike’s song “Night Rider’s Lament” to add to your music playlist.

“Mike Aiken – The singing sea captain sings tunes that reminds you of various genres of music and often they entangle each other.  Mike has obviously been influenced by multiple cultures and you can hear it in his music.  Maybe a John Denver Cowboy would best describe Mike.  His songs are heartfelt as Mike himself is.  Mike Aiken’s songs tell a story and his stories tell a song.”  ~ Music Charts Magazine®

Mike Aiken’s vast treasure chest of experiences and mastery of varied stringed instruments have contributed to a catalogue of music that cannot be defined by one genre or style. Originally from Western New York, he honed his skills playing in Blues, Southern Rock, and Country bands. He began his solo career as a songwriter and artist when he sailed out of the cold Great Lakes and eventually to the shores of coastal Virginia, where he resides on his sailboat today. A United States Coast Guard 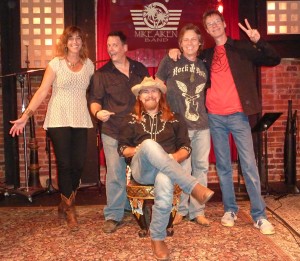 captain, he has sailed tens of thousands of offshore miles along with his wife Amy, making stops along the Canadian Maritimes, US coast, Caribbean and Europe.

Aiken’s love for singing, songwriting, and sailing has taken him all over the world. As a songwriter Aiken puts pen to paper and shares his colored and colorful life by drawing tales from “trail riders, aging rodeo champs, sea captains, Rastafarians and outlaws on the lamb”. His songs are so diverse, so honest, that they speak to a global audience and have garnered success on the charts as well as critical acclaim from the media and his peers. You can find him performing live anywhere from outdoor festivals with his high-energy band to intimate acoustic sessions as well as hosting workshops for aspiring songwriters and sailors alike.

As an artist who comes by his stories honestly, Aiken has definitely taken his place among well-respected songwriters and musicians in the Americana and Country communities. Captains & Cowboys, Aiken’s sixth studio album, has received critical acclaim from media and peers in the United States as well as overseas including a first-round GRAMMY nomination. The album, which Aiken co-produced with Dan Baird (Georgia Satellites) and Ben Strano (Jack Sundrud/Poco), has established Aiken’s presence as a songwriter and artist in multiple genres. Various songs have been chosen for compilations and “Chesapeake” was chosen by Sports Illustrated magazine as one of the Top 40 Sports Songs of All Time. He has had five Top 30 singles on the radio in the US and Europe.

In addition, Aiken has written and produced music for Raceline, America’s only weekly syndicated show about NASCAR racing, and penned the ‘On The Road” articles for Singer & Musician Magazine. Mike always finds time to give back to the community with his philanthropic projects that include the annual Aiken & Friends Fest that benefits youth music education and the Great Chesapeake Bay Schooner Race that benefits environmental concerns. He is an active endorsee for Takamine Guitars, Ovation Guitars and Mandolins, TKL/Cedar Creek Custom Cases and Levi’s Jeans.

To find out more about Mike Aiken:

LISTEN to the “NEW DISCOVERY” Interview with Mike Aiken – HERE: