Check out this Music Charts Magazine® “NEW DISCOVERY” Interview with “Makayla Lynn” and be prepared to be excited knowing there is still 100% awesome music out there that you still have not heard.

After you listen to this great radio interview pasted below of “Makayla Lynn” we are sure you will be glad you found this “New Discovery” and her song “Love Can Make You Cry” to add to your music playlist.

Ahead of her time Makayla has all the makings of a sure success.  She has just entered her teens and already has her music bases covered. Makayla hails from the Maritimes of Canada in the province of Nova Scotia. Makayla can sing, write and play. It is actually refreshing to hear a young artist with so much talent. It generally takes many years to master the craft of songwriting.  Makayla seams to have mastered songwriting as though she has been around for a lifetime.  To write songs and sing with such meaning at such a young age is wonderful and we at Music Charts Magazine® are proud to introduce to you Makayla Lynn.

Ask your radio station to hear Makayla Lynn’s song “Love Can Make You Cry”.  We give it 3 thumbs up!!!

With more than a half million video views from over 17,000 social media fans, Makayla Lynn is quickly becoming a household name. She has penned over 50 songs and recently released her Nashville recorded and produced album “Daydream” that has already seen 4 award nominations and has had a single released across Canada with great success. Makayla is no stranger to the stage.  She has performed for the past 5 years all around the Maritimes, Ontario and even in Nashville. Makayla has shared the stage and opened for some of country music’s biggest names in front of crowds as large as 30,000 people.
Barely a teenager, Makayla Lynn has 3 albums under her belt including her latest project “Daydream”. Daydream was recorded in Nashville, TN and released in June 2014. Daydream has been nominated for ECMA Country Album of the Year, ECMA Rising Star of the Year,  IMEA Country Album of the Year as well as Music Nova Scotia’s Country Recording of the Year. A ground breaking project for such a young artist, the components of the album will make it competitive in today’s country market. The first single was released to 150 stations across Canada in August 2014 and has made the DMDS chart for the most active indies in it’s first week at radio.
“Makayla Lynn has it…and it’s just the beginning. At 13 she can hold a crowd of thousands with her singing/songwriting and playing. Can’t wait to see what her budding career will bring the world of country music”  ~ Russell MacKenzie, FX101.9fm – Halifax
The past 3 years have found Makayla Lynn performing alongside of many of country music’s biggest icons. She has been fortunate enough to spend time and share stages with Carrie Underwood, The Dixie Chicks, Dwight Yoakam, Kenny Chesney, Toby Keith, Brad Paisley, Tanya Tucker, Bill Anderson, Rascal Flatts, Tim McGraw, Kid Rock and countless others. In March 2013 Makayla took the stage with Juno Award Winning songwriter Serena Ryder for a duet in front of a sold out crowd. The following week she was the youngest performer at the East Coast Music Week receiving standing ovations from industry executives. August 2014 Makayla joined songwriter Bruce Guthro at the Halifax Metro Centre as part of an event for the Stan Rogers Festival where she performed the ballad she wrote for the 3 fallen police officers in Moncton. “Fallen Hero” has since been picked up by the Canadian Red Cross and the Illinois State Police Department for use in powerful tribute videos.
Makayla has lent her musical talent to many causes including The Canadian Cancer Foundation, The IWK Children’s Telethon, The IWK’s Great Big Dig, The QEII’s night of Discovery Gala, The Kids Help Phone, The Relaunch of Bluenose II, The 60th anniversary of the Queen Elizabeth II Diamond Jubilee, The Christmas Daddies, The Nova Scotia Mental Health Foundation, The IWK Children’s Hospital and many more. In Nova Scotia however, the name Makayla Lynn is synonymous with the fight against bullying. Her song The Joke’s On You is being used as an anti-bullying theme in classrooms as far away as Japan and Australia. It June 2013 the song was picked up by the Canadian Red Cross as part of their RespectED Anti-bullying campaign. Since it’s release in June 2010 Makayla has been a strong voice for other youth consistently spreading her message “you are not alone”. She has spoken out and been featured on CTV, CBC, Global, Eastlink, Bell Aliant and many other news outlets. It was because of this leadership that the Premier of Nova Scotia awarded her the Power of Positive Change scholarship that spring.

For the past 4 years Makayla has competed in the Kiwanis Music Festival and in 2012, of the 8000 entries she was asked to be 1 of 11 acts to showcase in the Chronicle Herald Gala at the Rebecca Cohn. These spots are reserved for musicians of all genres who were considered the highlights of the festival. While she is a self taught guitarist, she is also a vocal and piano student and has earned awards for the highest voice and piano exam marks in her grade levels. She has won scholarships every year since beginning at the Maritime Conservatory of Performing Arts and is a straight A grade school student. Not only is she talented she is also incredibly smart; a very powerful combination.

With many festivals and showcases already secured 2015 keep your eyes on this rising star.  Depending on the situation Makayla continues to tour as both an acoustic solo act and as well backed by her full band of seasoned musicians.

To find out more about Makayla Lynn:

LISTEN to the “NEW DISCOVERY” Interview with Makayla Lynn – HERE: 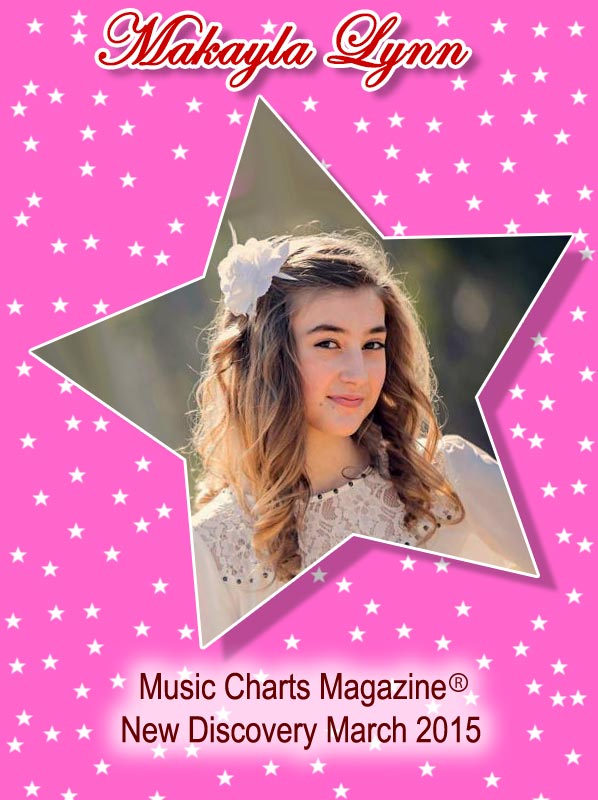