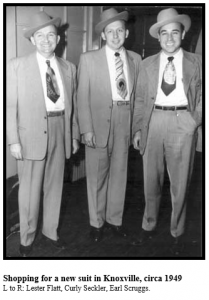 Big Al Weekley who host “The Big Al Bluegrass Show” has been working with Music Charts Magazine® for almost three years now along with his various radio shows in Bluegrass, Rock & Country music.  Being nominated twice as Top 5 Bluegrass Broadcaster of the Year with the IBMA ( www.IBMA.org ) including the past 2014, Big Al is more then equipped to cover the history of the Bluegrass greats!

Please sit back and enjoy this special episode of “The Big Al Bluegrass Show” sponsored by Music Charts Magazine® as we honor the life of Curly Seckler.

This “Curly Seckler Tribute” is being played LIVE on the radio this week on various radio stations that syndicate “The Big Al Bluegrass Show” including WMJD 100.7 FM in Gundy, VA and 99.3 FM Skeggs, VA as well as on WOTR 96.3 FM in Weston, WV and the Midwest 50,000 watt powerhouse KRVN 880 AM located in Lexington, NE

To listen to this 4 part tribute on “Curly Seckler” push the play button below on the player.

To find out more about Curly Seckler please visit his website:

Bluegrass legend Curly Seckler began his career in music in 1935, performing with his brothers in a band called the Yodeling Rangers, in Salisbury, NC.  In1939 he hit the big time, when Charlie Monroe recruited him to sing harmony in his new group, the Kentucky Partners, after the breakup of the Monroe Brothers. Curly worked several stints with Charlie Monroe early in his career. He also teamed with various other bluegrass pioneers, including Jim and Jesse McReynolds, Mac Wiseman, The Sauceman Brothers, and The Stanley Brothers.

The Foggy Mountain Boys circa 1955

In 1949 Curly joined Lester Flatt and Earl Scruggs’ Foggy Mountain Boys, as tenor singer and mandolin player. Except for a couple of brief absences, he remained with Flatt & Scruggs until 1962. During that time he recorded well over 100 songs with them, including many of their best known and most popular hits (“Roll in My Sweet Baby’s Arms,” “Salty Dog Blues,” “I’ll Go Stepping Too,” “Dim Lights, Thick Smoke,” etc.). Several of Curly’s original songs were recorded by Flatt & Scruggs, including “No Mother Or Dad” and “That Old Book of Mine.”

The Lester Flatt/Curly Seckler duets from the 1950s are still considered to be among the best bluegrass performances ever. In addition, Curly’s rock-solid “chop” rhythm on mandolin was the foundation of the Foggy Mountain Boys’ instrumental sound during his tenure. Millions of fans are now able to experience the magic of this great band through the DVDs of classic Flatt & Scruggs TV shows which have been released by Shanachie Records in conjunction with the Country Music Hall of Fame.

Curly left the music business briefly during the 1960s, but soon returned to performing when bluegrass festivals began to thrive. He joined Lester Flatt’s Nashville Grass in 1973 and remained until Lester’s death in 1979. Lester passed the torch to Curly, and he took over leadership of the Nashville Grass for another fifteen years, until his retirement in 1994. That same year Curly recorded “60 Years of Bluegrass With My Friends,” a celebration of his career, with a stellar guest list of musicians, including Ralph Stanley, Josh Graves, Jim & Jesse McReynolds, Mac Wiseman, Benny Martin, Marty Stuart, Willis Spears, Jimmy Martin, Doyle Lawson, and more. In early 2005, Copper Creek Records reissued this great recording, with several bonus tracks. Also in 2005, County Records reissued Curly’s first solo album from 1971, with additional bonus tracks from 1989 (“That Old Book of Mine” Cnty-2740).

Though Curly retired from full-time touring, he continued to make frequent guest appearances at festivals and concerts. He also continued to write songs, and in 2004 he made his first new recordings in ten years. Nearly half of the songs are Seckler originals, many of which had not been performed before. The incredible list of guests who appeared on these recordings includes Dudley Connell, Larry Sparks, Russell Moore, John Carter Cash, Laura Weber Cash, Larry Cordle, Tater Tate, Rob Ickes, Herschel Sizemore, Chris Sharp, Larry Perkins, Leroy Troy, and many more. The first volume of new material was released on Copper Creek in the fall of 2005 (“Down In Caroline” CC-0236). It was a finalist for 2006 IBMA Recorded Event of the Year. In late 2006, Copper Creek released Curly’s latest CD, “Bluegrass, Don’t You Know” (CC-0243). The Chicago Tribune touted it as one of the Top 10 bluegrass CDs of the year.

With Woody Platt of the Steep Canyon Rangers

Seckler is regarded as one of the greatest tenor singers ever in bluegrass, and in 2004 he was inducted into the IBMA Hall of Fame. He was inducted into the North Carolina Music Hall of Fame in 2010, and into the Bill Monroe Bluegrass Hall of Fame in 2011. Into his early 90s, Curly was still a vital, creative, hard-working entertainer, performing at selected music festivals including MerleFest, IBMA Fan Fest, ROMP, and Hardly Strictly Bluegrass Festival. In 2008 he was featured on the PBS television show, Song of the Mountains, backed by the superb North Carolina band, The Steep Canyon Rangers. Curly was profiled on UNC-TV’s North Carolina People show in 2009 (available for viewing on our web site). He made a second appearance on the Song of the Mountains show in 2010. That same year Seckler celebrated his 75th anniversary in music, with a special program at the Country Music Hall of Fame in Nashville.

Curly Seckler is the embodiment of bluegrass history – a legendary entertainer who has seen it all – and living proof that traditional bluegrass still thrives in the new millennium!