Music Charts Magazine History – Song for the month of September 2013: Green Day – “Wake Me Up When September Ends”

Green Day – “Wake Me Up When September Ends“ 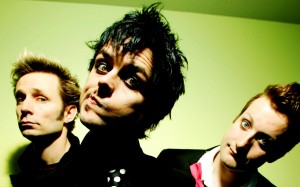 Listen to Green Day’s song “Wake Me Up When September Ends” here:

Green Day is an American punk rock band formed in 1987. The band consists of lead vocalist and guitarist Billie Joe Armstrong, bassist and backing vocalist Mike Dirnt, drummer Tré Cool and guitarist and backing vocalist Jason White, who became a full member after playing in the band as a session and touring guitarist for 13 years. Cool replaced former drummer John Kiffmeyer in 1990, prior to the recording of the band’s second studio album, Kerplunk (1992).

Green Day was originally part of the punk scene at 924 Gilman Street in Berkeley, California. The band’s early releases were from the independent record label Lookout! Records. In 1994, its major label debut Dookie released through Reprise Records became a breakout success and eventually sold over 10 million copies in the U.S.Green Day was widely credited, alongside fellow California punk bands Sublime, The Offspring and Rancid, with popularizing and reviving mainstream interest in punk rock in the United States. Green Day’s three follow-up albums, Insomniac (1995), Nimrod (1997), and Warning (2000) did not achieve the massive success of Dookie, though they were still successful, with Insomniac and Nimrod reaching double platinum and Warning reaching gold status. The band’s rock opera, American Idiot (2004), reignited the band’s popularity with a younger generation, selling five million copies in the United States. The band’s eighth studio album, 21st Century Breakdown, was released in 2009 which achieved the band’s best chart performance to date. In 2012, 21st Century Breakdown was followed up by a trilogy of albums called ¡Uno!, ¡Dos!, and ¡Tré! released on September, November and December 2012 respectively. 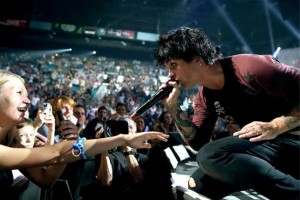 They are one of the world’s best-selling groups of all time, having sold over 75 million albums worldwide. The group has won five Grammy Awards: Best Alternative Album for Dookie, Best Rock Album for American Idiot, Record of the Year for “Boulevard of Broken Dreams”, Best Rock Album for the second time for 21st Century Breakdown and Best Musical Show Album for American Idiot: The Original Broadway Cast Recording. In 2010, a stage adaptation of American Idiot debuted on Broadway. The musical was nominated for several Tony Awards, including Best Musical and Best Scenic Design. 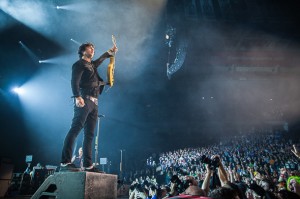 Green Day’s sound is often compared to first wave punk bands such as the Ramones, The Clash, Sex Pistols, The Jam, and the Buzzcocks.[23] Citing the band’s musical style prevalent on Dookie, Stephen Erlewine of Allmusic described Green Day as “punk revivalists who recharged the energy of speedy, catchy three-chord punk-pop songs.” While Armstrong is the primary songwriter, he looks to the other band members for organizational help. Billie Joe Armstrong has mentioned that some of his biggest influences are seminal alternative rock bands Hüsker Dü and The Replacements, and that their influence is particularly noted in the band’s chord changes in songs. Green Day has covered Hüsker Dü’s “Don’t Want to Know If You Are Lonely” as a b-side to the “Warning” single, and the character “Mr. Whirly” in their song “Misery” is a reference to the Replacements song of the same name. Among other influences, Green Day have also cited The Who and power pop pioneers Cheap Trick.

The band has generated controversy over whether the band’s musical style and major-label status constitutes as “true punk”. In reaction to both the style of music and the background of the band, John Lydon, former front man of the 1970s punk band the Sex Pistols commented:

“So there we are fending off all that and it pisses me off that years later a wank outfit like Green Day hop in and nick all that and attach it to themselves. They didn’t earn their wings to do that and if they were true punk they wouldn’t look anything like they do.”

Armstrong himself has discussed the group’s status of being a punk band on a major record label, saying “Sometimes I think we’ve become totally redundant because we’re this big band now, we’ve made a lot of money – we’re not punk rock any more. But then I think about it and just say, ‘You can take us out of a punk rock environment, but you can’t take the punk rock out of us.'”

In 1987, friends Billie Joe Armstrong and Mike Dirnt, 15 years old at the time, formed a band called Sweet Children. Its first live performance took place on October 17, 1987 at Rod’s Hickory Pit in Vallejo, California. In 1988, Armstrong and Dirnt began working with Sean Hughes and the former Isocracy drummer John Kiffmeyer, also known as “Al Sobrante”. As said in the film Punk’s Not Dead, Armstrong cites the band Operation Ivy (which featured Tim Armstrong and Matt Freeman of Rancid) as a major influence, and a group that inspired him to form a band. 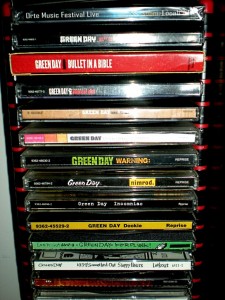 In 1988, Larry Livermore, owner of Lookout! Records, saw the band play an early show and signed the group to his label. In 1989, the band recorded its debut extended play, 1,000 Hours. Before 1,000 Hours was released, the group dropped the name Sweet Children; according to Livermore, this was done to avoid confusion with another local band Sweet Baby. The band adopted the name Green Day, due to their fondness for marijuana.

Lookout! would release Green Day’s debut studio album, 39/Smooth in early 1990. Green Day would record two extended plays later that year, Slappy and Sweet Children, the latter of which included older songs that the band had recorded for the Minneapolis independent record label Skene! Records. In 1991, Lookout! Records re-released 39/Smooth under the name 1,039/Smoothed Out Slappy Hours, and added the songs from the band’s first two EPs, Slappy, and 1,000 Hours. In late 1990, shortly after the band’s first nationwide tour, Sobrante left the East Bay area to attend college. The Lookouts drummer Tré Cool began filling in as a temporary replacement and later Cool’s position as Green Day’s drummer became permanent. The band went on tour for most of 1992 and 1993, and played a number of shows overseas in Europe. The band’s second studio album Kerplunk sold 50,000 copies in the U.S.