Music Charts Magazine® History – Song for the month of October 2015: Starship “We Built This City”

“We Built This City” 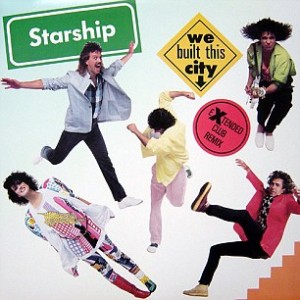 “We Built This City” is a song written by Bernie Taupin, Martin Page, Dennis Lambert, and Peter Wolf, and originally recorded by US rock group Starship and released as their debut single 1 August 1985.

The lyrics describe a city built on rock n’ roll music. The lyrics explicitly mention the Golden Gate Bridge and refer to “the City by the Bay”, a common moniker for Starship’s hometown of San Francisco, California. However, the lyrics also refer to “the City That Rocks”, a reference to Cleveland, Ohio, and “the City That Never Sleeps”, a reference to New York City. Capitalizing on the ambiguity, several radio stations added descriptions of their own local areas when they broadcast the song, or even simply added their own ident in its place.

Visit Starship by clicking the below links: