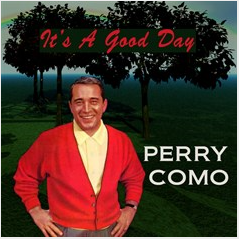 “It’s a Good Day” is a popular song written by Peggy Lee and Dave Barbour and published in 1947.

The song has been recorded by many singers since its introduction, most recently by Susie Arioli. The song was also recorded by legendary Judy Garland on a recording of The Judy Garland Show. The most popular version of the song is probably Perry Como’s, released on his 1955 RCA Victor album So Smooth.

The song served as the background score during the opening credits of Indian film director Rajkumar Gupta’s 2008 debut film Aamir.

The FX series Wilfred used the song for the episode “Trust” where it was played in the montage of Ryan and Wilfred’s time in Venice Beach, California.

In the 1999 film Blast From the Past the song played in the background when Father Calvin (Christopher Walken) was checking supplies in the bunker.

The song made an appearance on an episode of America’s Funniest Home Videos.

In 2013, the song (Peggy Lee version) was used as backdrop in commercials for the University of Phoenix.