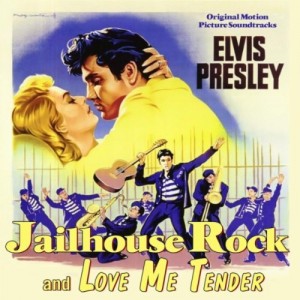 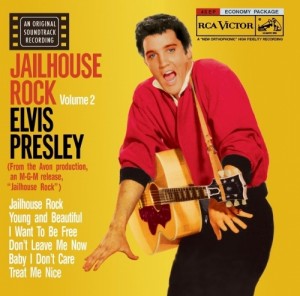 “Jailhouse Rock” is a song written by Jerry Leiber and Mike Stoller that first became a hit for Elvis Presley. The song was released as a 45rpm single on September 24, 1957, to coincide with the release of Presley’s motion picture, Jailhouse Rock.

The song as sung by Elvis Presley is #67 on Rolling Stone‘s list of The 500 Greatest Songs of All Time and was named one of The Rock and Roll Hall of Fame’s 500 Songs that Shaped Rock and Roll.

Also in 1957, “Jailhouse Rock” was the lead song in an EP (extended play single), together with other songs from the film, namely “Young and Beautiful,” “I Want to be Free,” “Don’t Leave Me Now,” and “(You’re So Square) Baby I Don’t Care.” It topped the Billboard EP charts, eventually selling two million copies and earning a double-platinum RIAA certification. 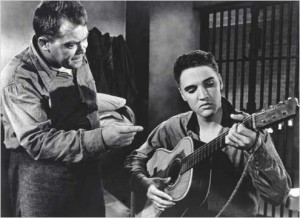 In 2005, the song was re-released in the UK and reached #1 for a single week. The song, which is an example of simple verse form, eventually received an additional double-platinum certification from the RIAA in 1992, representing shipments of 2 million copies of the single.

“Jailhouse Rock” was performed regularly in a medley along with many old rock and roll hits by Queen and was the opening song on Queen’s 1980 North American tour for The Game. It was the last song in the motion picture The Blues Brothers. This song was featured on American Idol when Season 5 contestant Taylor Hicks performed it on May 9, 2006 and when Season 7 contestant Danny Noriega performed it on February 20, 2008. The song was also featured in Disney’s animated film Lilo & Stitch during the ending credits. In an episode of Full House Jesse and Becky sing this song at their wedding reception. The song was included in the musical revue “Smokey Joe’s Cafe”.

The German rock band Spider Murphy Gang is named after one of the characters in the lyrics. 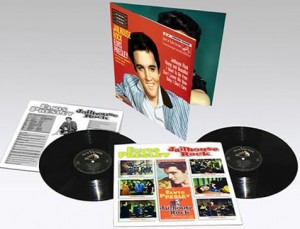 ailhouse Rock” is playing when the car runs down Buddy Repperton, one of the guys who smashed up the car at the garage.

Westlife performed the song for the medley part of their Where the Dreams Come True Tour.

Chris Brown covered the song at the 2007 Movie’s Rock.

Scratch Track added this song to their live performance of “Love Someone.”

Dwayne Johnson performed a parody of the song that pokes fun at his Wrestlemania XXVIII opponent John Cena during the Rock Concert on an episode of WWE Raw in March 2012. WWE later released this version on iTunes as “Rock’s Concert”.

Scenes from the music video of the One Direction single Kiss You are based on the “Jailhouse Rock” production number from the Elvis film.

“Jailhouse Rock” has also been recorded by: