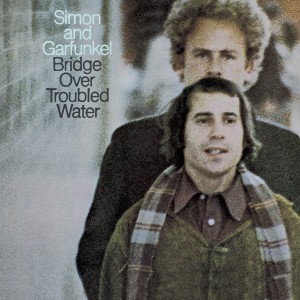 “Bridge over Troubled Water” is a song by American music duo Simon & Garfunkel from their fifth studio album, Bridge over Troubled Water (1970). Produced by the duo themselves and Roy Halee, the song was released as the album’s lead single on January 26, 1970. Composed by singer-songwriter Paul Simon, the song is performed on piano and carries the influence of gospel music. The original studio recording employs elements of Phil Spector’s “Wall of Sound” technique.

It was the last song recorded for their fifth and final album, but the first fully completed. The song’s instrumentation was recorded in California while the duo’s vocals were cut in New York. Simon felt his partner, Art Garfunkel, should sing the song solo, to which he initially declined. Session musician Larry Knechtel performs piano on the song, with Joe Osborn playing bass guitar and Hal Blaine closing out the song with drums. The song won five awards at the 13th Annual Grammy Awards in 1971, including Grammy Award for Record of the Year and Song of the Year.

The song became Simon & Garfunkel’s biggest hit single, and it is often considered their signature song. It was a number one hit on the Billboard Hot 100 for six weeks, and it also topped the charts in the United Kingdom, Canada, France, and New Zealand. It was a top five hit in eight other countries as well. It became one of the most performed songs of the twentieth century, with over 50 artists, among them Elvis Presley and Aretha Franklin, covering the song. It was ranked number 48 on Rolling Stone’s 500 Greatest Songs of All Time.