Music Charts Magazine History – Song for the month of November 2013: Johnny Cash – “One Piece At A Time”

Johnny Cash - "One Piece At A Time" 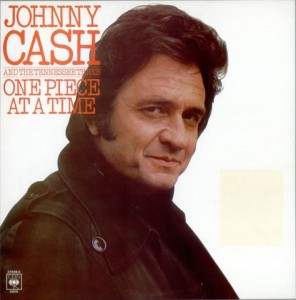 Listen to Johnny Cash and The Tennessee Three song "One Piece At A Time" here: 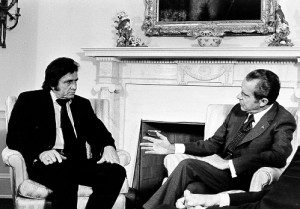 "One Piece at a Time" is a rockabilly novelty song written by Wayne Kemp and recorded by Johnny Cash in 1976. It would be the last song performed by Cash to reach number one on the Billboard Hot Country Singles chart.

The song tells of a man who, in 1949, leaves his home in Kentucky to pursue work at General Motors in Detroit, Michigan. The singer assembles wheels on Cadillac's, watching each one roll by day after day on the assembly line, knowing that he will never be able to afford one.

Beginning almost immediately, he and a co-worker decide to steal a Cadillac, using their assembly line jobs to obtain the parts via salami slicing. He takes the small parts home hidden in his large lunchbox; larger parts are smuggled out in his co-worker's motor home. 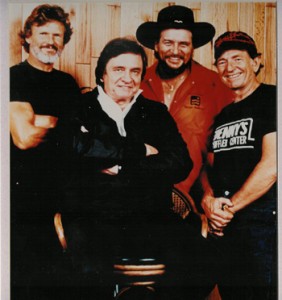 the transmission was from 1953 and the engine was from 1973), but once they have what they think is a complete car, they attempt to assemble the pieces. The result is an odd-looking Cadillac created from parts of many different models and whose pieces do not fit together very well (for example, it had only one tail fin and three headlights, two on the left and one on the right).

The singer's wife is surprised at the outcome but wants a ride. However, the folks at the courthouse were not as pleased—it took the "whole staff" to type up the vehicle title, which ended up weighing 60 pounds.

The song ends with a Citizens Band radio conversation between the singer and a truck driver inquiring about the "psychobilly Cadillac", in which the singer replies, "you could say I went ... to the factory and picked it up, it's cheaper that way".

Bruce Fitzpatrick, owner of Abernathy Auto Parts and Hilltop Auto Salvage in Nashville, Tennessee, was asked by the promoters of the song to build the vehicle for international promotion. Fitzpatrick had all the models of Cadillac's mentioned in the song when it was released and built a car using the song as a model. The result was presented to Cash in April 1976. It was parked outside The House Of Cash in Hendersonville, Tennessee, until someone could find a place to store it. 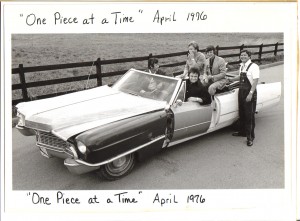 Johnny Cash in the driver's seat of the - One Piece At a Time - Cadillac with Bruce Fitzpatrick standing at the far right.