Music Charts Magazine® History – Song for the month of June 2015: Mungo Jerry – “In The Summertime”

Mungo Jerry – “In The Summertime“ 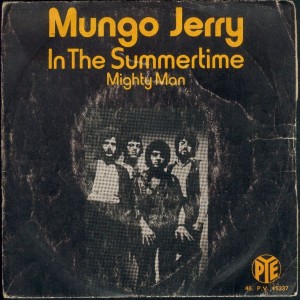 “In the Summertime” is the debut single by British rock band Mungo Jerry. Written by lead singer Ray Dorset, it celebrates the carefree days of summer. In 1970 it reached number one in charts around the world, including seven weeks in the UK Singles Chart, two weeks in Canada, and number three on the Billboard Hot 100 singles chart in the US. It is considered one of the best-selling singles of all time with an estimated 6 million copies sold.

The song took Dorset only ten minutes to compose on a second-hand Fender Stratocaster while he was taking time off work from his regular job, working in a lab for Timex. The song’s lyric “have a drink, have a drive, go out and see what you can find” led to the song’s somewhat ironic use in a UK advert for the campaign Drinking and Driving Wrecks Lives.

In an interview with Gary James, Dorset explained the origin of the “motorcycle” sound towards the end of the song: “I said “We’ll just get a recording of a motorcycle, stick it on the end of the song and then re-edit the front and then put the front off to the motorcycle so it starts up again.” But I couldn’t find a motorcycle. Howard Barry, the engineer had an old, well, it wasn’t old then, a Triumph sports car, which he drove past the studio while Barry Marrit was holding the microphone. So, he got the stereo effects from left to right or right to left, whatever. And that was it.”