Music Charts Magazine® History – Song for the month of July 2014: Toby Keith – “Courtesy of the Red, White and Blue”

Toby Keith - "Courtesy of the Red, White and Blue" 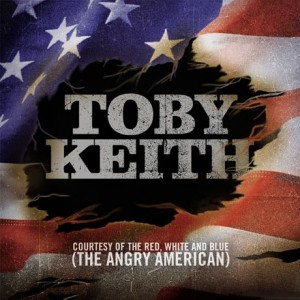 "Courtesy of the Red, White and Blue (The Angry American)" is a song written and recorded by American country music artist Toby Keith. The song was written in late 2001, and was inspired by Keith's father's death in March 2001, as well as the September 11, 2001 attacks on the United States later that year. It was released in May 2002 as the lead single from the album, Unleashed. The song topped the Billboard Hot Country Singles & Tracks chart and reached number 25 on the Hot 100 chart becoming his biggest solo hit on that chart.

On March 24, 2001, Keith’s father, Hubert Keith (H.K.) Covel, was killed in a car accident. That event and the September 11, 2001 attacks prompted Keith to write the song "Courtesy of the Red, White, & Blue (The Angry American)", a song about his father’s patriotism and faith in the USA. It took him 20 minutes to write the song. At first, Keith refused to record the song and only sang it live at his concerts for military personnel.

The reaction was so strong that the Commandant of the Marine Corps James L. Jones told Keith it was his duty as an American citizen to record the song. "It's your job as an entertainer to lift the morale of the troops," Jones said to Keith. "If you want to serve, that is what you can do." As the lead single from the album Unleashed (2002), "Courtesy of the Red, White, & Blue" peaked at number 1 on the country charts over the weekend of July 4.

In a November 2003 interview with CBS, Keith gave his take on the song: “It wasn’t written for everybody. And when you write something from your heart - I had a dad that was a veteran, taught me how precious our freedom is - I was so angry when we were attacked here on American soil that it leaked out of me. You know, some people wept when they heard it. Some people got goose bumps. Some people were emotionally moved. Some cheered, turned their fists in the air.”

The line, "'cause we'll put a boot in your ass / it's the American way," is part of the introduction of the Sean Hannity radio show that is played at the beginning of each hour.