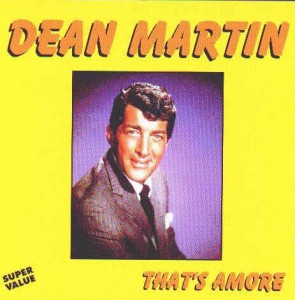 “That’s Amore” is a 1952 song by composer Harry Warren and lyricist Jack Brooks. It became a major hit and signature song for Dean Martin in 1953. Amore (pronounced ah-MOR-eh) means “love” in Italian.

The song first appeared in the soundtrack of the Martin and Lewis comedy film The Caddy, released by Paramount Pictures on August 10, 1953. In the film, the song is performed mainly by Dean Martin, with Jerry Lewis joining in and then followed by the other characters in the scene. It received a nomination for the Academy Award for Best Original Song of that year, but it lost to “Secret Love” from Calamity Jane starring Doris Day.

The track that was used for the single released by Capitol Records was recorded on August 13, 1953, (Session 3098; Master 11694-6), with the orchestra conducted by Dick Stabile, at Capitol Records’ studios at 5505 Melrose Avenue, Hollywood, California. On November 7, 1953, Martin’s record of the song, with “You’re the Right One” (which was recorded at the same session as “That’s Amore”) on the flip side, peaked at #2 on the Billboard charts. The song was kept from the #1 spot when Les Paul and Mary Ford’s Capitol Records single “Vaya Con Dios” returned to the #1 spot after being knocked out by Stan Freberg’s Capitol Records single “St. George and the Dragonet”, which had been #1 for the previous four weeks, after “Vaya Con Dios” had been #1 for the nine previous weeks.