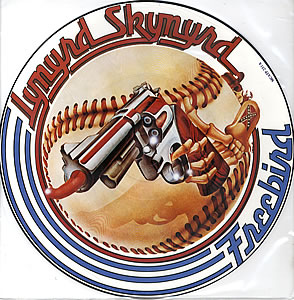 "Free Bird" (often spelled "Freebird", including by the band itself on the cover of the single) is a song by the American rock band Lynyrd Skynyrd. It first featured on the band's debut album in 1973, and has been included on subsequent albums released by the band, including the previously unreleased, unfaded-ending version of the original recording (featured on Skynyrd's Innyrds). Amazon.com music reviewer Lorry Fleming calls it "the most-requested song in the history of rock music."

It is used as a finale by Lynyrd Skynyrd during their live performances, and is their longest song, often going well over 14 minutes when played live.

According to guitarist Gary Rossington, for two years after Allen Collins wrote the initial chords, vocalist Ronnie Van Zant insisted that there were too many for him to create a melody in the belief that the melody needed to change alongside the chords. After Collins played the unused sequence at rehearsal one day, Van Zant asked him to repeat it, then wrote out the melody and lyrics in three or four minutes. The guitar solos that finish the song were added in originally to give Van Zant a chance to rest, as the band was playing several sets per night at clubs at the time. Soon afterward, the band learned piano-playing roadie Billy Powell had written an intro to the song; upon hearing it, they included it as the finishing touch and had him formally join as their keyboardist. The song was originally written in memory of Duane Allman.

Allen Collins's then-girlfriend, Kathy, whom he later married, asked him, "If I leave here tomorrow, would you still remember me?" Collins noted the question and it eventually became the opening line of "Free Bird".

"Free Bird" is included in The Rock and Roll Hall of Fame's 500 Songs that Shaped Rock and Roll, and at number 193 in Rolling Stone's 500 Greatest Songs of All Time. In 2009 it was named the 26th best hard rock song of all time by VH1.