Music Charts Magazine® History – Song for the month of December 2014: Christina Aguilera – “Have Yourself A Merry Little Christmas”

Christina Aguilera – “Have Yourself A Merry Little Christmas“ 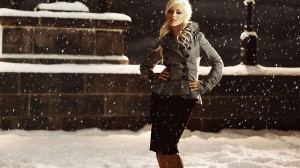 “Have Yourself a Merry Little Christmas” is a song introduced by Judy Garland in the 1944 MGM musical Meet Me in St. Louis. Frank Sinatra later recorded a version with modified lyrics. The song was written by Hugh Martin and Ralph Blane. In 2007, ASCAP ranked “Have Yourself a Merry Little Christmas” the third most performed Christmas song during the preceding five years that had been written by ASCAP members. In 2004 it finished at #76 in AFI’s 100 Years…100 Songs rankings of the top tunes in American cinema.

The song was written while Martin was vacationing in a house in the neighborhood of Southside in Birmingham, Alabama, that his father Hugh Martin designed for his mother as a honeymoon cottage. Located at 1919 South 15th Avenue (just down the street from his birthplace at 1900 South 14th Avenue), the house became the home of Martin and his family in 1923. The song first appeared in a scene in Meet Me in St. Louis, in which a family is distraught by the father’s plans to move to New York City for a job promotion, leaving behind their beloved home in St. Louis, Missouri, just before the long-anticipated 1904 World’s Fair begins. In a scene set on Christmas Eve, Judy Garland’s character, Esther, sings the song to cheer up her despondent five-year-old sister, Tootie, played by Margaret O’Brien.