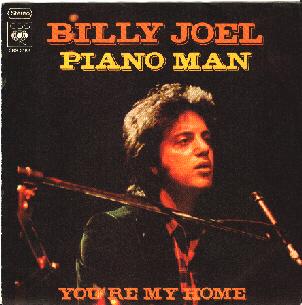 “Piano Man” is the first single released by Billy Joel. It was released on November 2, 1973, and has been on several albums. Billy Joel’s first major hit and his signature song, the song peaked at #25 on the Billboard Hot 100 chart in April 1974.

“Piano Man” is a fictionalized retelling of Joel’s experience as a piano-lounge singer for six months in 1972 at the now defunct Executive Room bar in Los Angeles, located near the intersection of Wilshire Boulevard and Western Avenue. Joel has stated that all of the characters depicted in the song were based on real people. Joel had moved from New York to L.A. to record his first album, Cold Spring Harbor which was marred by a mastering error by the album’s producers at Family Productions, the first label that signed Joel. After this bad experience, Joel wanted to leave his contract with Family Productions for Columbia Records, but the contract that he’d signed made this very difficult. So Joel stated that he was “hiding out” at the bar, performing under the name Bill Martin, while lawyers at Columbia Records tried to get him out of his first record deal.

The verses of the song are sung from the point of view of a bar piano player who focuses mainly on everyone else at the bar: an old man, John the bartender, the waitress, businessmen, and bar regulars like “real estate novelist” Paul and US Navy sailor, Davey. Most of these characters have unfulfilled dreams, and the pianist’s job is to help them “forget about life for a while.” The chorus, in bar-room sing-along style, comes from the bar patrons themselves, who plead, “Sing us a song, / You’re the piano man; / Sing us a song tonight. / Well, we’re all in the mood for a melody, / And you’ve got us feeling all right.”