Music Charts Magazine History – Song for the month of August 2013: Ray Charles – “Georgia On My Mind” 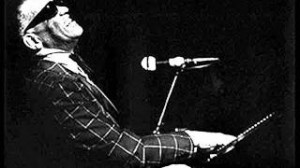 Listen to Ray Charles’s song “Georgia On My Mind” here: 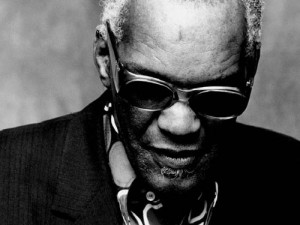 Ray Charles Robinson (September 23, 1930 – June 10, 2004) was an American singer-songwriter and composer known as Ray Charles. He was a pioneer in the genre of soul music during the 1950s by fusing rhythm and blues, gospel, and blues styles into his early recordings with Atlantic Records.He also helped racially integrate country and pop music during the 1960s with his crossover success on ABC Records, most notably with his Modern Sounds albums. While with ABC, Charles became one of the first African-American musicians to be given artistic control by a mainstream record company. Frank Sinatra called Charles “the only true genius in show business,” although Charles downplayed this notion.

The influences upon his music were mainly jazz, blues, rhythm and blues and country artists of the day such as Art Tatum, Nat King Cole, Louis Jordan, Charles Brown, and Louis Armstrong. His playing reflected influences from country blues, barrelhouse and stride piano styles.

Rolling Stone ranked Charles number ten on their list of “100 Greatest Artists of All Time” in 2004, and number 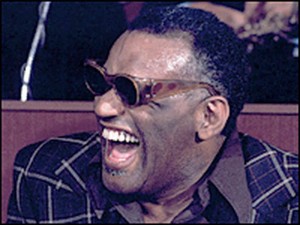 two on their November 2008 list of “100 Greatest Singers of All Time”. In honoring Charles, Billy Joel noted: “This may sound like sacrilege, but I think Ray Charles was more important than Elvis Presley.

On March 15, 1961, not long after releasing the hit song “Georgia on My Mind” (1960), Charles (born in Albany, Georgia) was scheduled to perform for a dance at Bell Auditorium in Augusta, Georgia. However, he cancelled after learning from students of Paine College that the larger auditorium dance floor would be restricted to whites, while blacks would be obligated to sit in the Music Hall balcony; he immediately left town after letting the public know why he wouldn’t be performing. The promoter sued Charles for breach of contract, Charles was fined $757 in Fulton County Superior Court in Atlanta on June 14, 1962 and, according to the biopic Ray (2004), Charles was banned from performing thereafter in Georgia, although this later was reported to be a Hollywood embellishment—Charles was, in fact, never banned from Georgia. However, Charles performed again at a desegregrated Bell Auditorium concert the following year with his backup group, The Raelettes, on October 23, 1963. 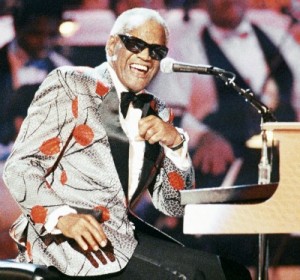 In 1979, Charles was one of the first of the Georgia State Music Hall of Fame to be recognized as a musician born in the state. Ray’s version of “Georgia On My Mind” was made the official state song for Georgia.

On December 7, 2007, Ray Charles Plaza was opened in Albany, Georgia, with a revolving, lighted bronze sculpture of Charles seated at a piano.

Ray Charles Robinson was the son of Aretha (Williams) Robinson, a sharecropper, and Bailey Robinson, a railroad repair man, mechanic and handyman. Aretha was a devout Christian and the family attended the New Shiloh Baptist Church. When Ray was an infant, his family moved from Albany, Georgia, where he was born, to the poor black community on the western side of Greenville, Florida. In his early years, Charles showed a curiosity for mechanical things and he often watched the neighborhood men working on their cars and farm machinery. His musical curiosity was sparked at Mr. Wiley Pit’s Red Wing Cafe when Pit played boogie woogie on an old upright piano. Pit would care for George, Ray’s brother, so as to take the burden off Aretha. However, George drowned in Aretha’s laundry tub when he was four years old. After witnessing the death of his brother, Ray would feel an overwhelming sense of guilt later on in life.

Charles started to lose his sight at the age of five and went completely blind by the age of seven, apparently 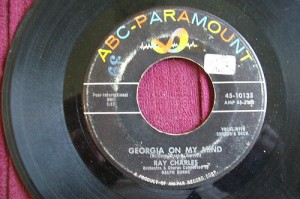 due to glaucoma. He attended school at the Florida School for the Deaf and the Blind in St. Augustine from 1937 to 1945, where he developed his musical talent. During this time he performed on WFOY radio in St. Augustine. His father died when he was 10, his mother five years later.

Charles played chess using a special board with holes for the pieces and raised squares. Charles referred to Willie Nelson as “my chess partner” in a 1991 concert. In 2002, he played and lost to American Grandmaster and former U.S. Champion Larry Evans. 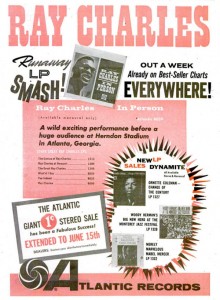 five for Ray Charles for Best Pop Vocal Album, Album of the Year, Record of the Year and Best Pop Collaboration with Vocals for “Here We Go Again” with Norah Jones, and Best Gospel Performance for “Heaven Help Us All” with Gladys Knight; he also received nods for his duets with Elton John and B.B. King. The album included a version of Harold Arlen’s “Over the Rainbow”, sung as a duet by Charles and Johnny Mathis; this record was played at his memorial service. 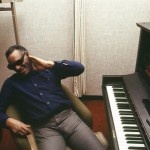 released. Genius & Friends consisted of duets recorded from 1997 to 2005 with his choice of artists. Ray Sings, Basie Swings consists of archived vocals of Ray Charles from live mid-1970s performances added to new instrumental tracks specially recorded by the contemporary Count Basie Orchestra and other musicians. Charles’s vocals recorded from the concert mixing board were added to new accompaniments to create a “fantasy concert” recording.