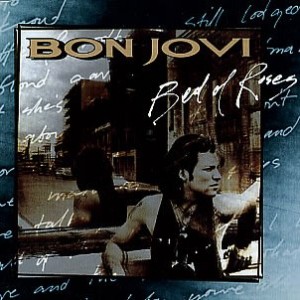 "Bed of Roses" is a rock song released by Bon Jovi in late January 1993, from the album Keep the Faith. Jon Bon Jovi wrote the song in a hotel room while suffering from a hangover and the lyrics reflects his feelings at the time. The song contains drawn out guitar riffs and soft piano playing, along with emotive and high vocals by Jon Bon Jovi.

The video for "Bed of Roses" begins with shots of Richie Sambora playing guitar high in the mountain tops, and then cuts to scenes of Jon alone in his hotel room, the band recording the song in the studio, and finally performing live on stage. Initially the video directors wanted Jon Bon Jovi to be on the mountain tops, but Jon said: "I was on top of a mountain in 'Blaze of Glory', send them" (Richie Sambora and David Bryan, who is seen playing the piano at the mountain top).