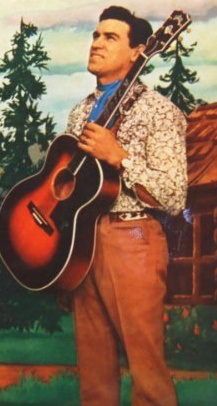 Marvin Karlton Rainwater (July 2, 1925 – September 17, 2013), was an American country and rockabilly singer and songwriter who had several hits during the late 1950s, including “Gonna Find Me a Bluebird” and “Whole Lotta Woman”, a UK no.1 record. He was known for wearing Native American-themed outfits on stage and was 25 percent Cherokee.

Rainwater was born in Wichita, Kansas, to Stella (née Miller) and Cicero Percy Rainwater, and grew up during the Great Depression. As a child, instead of listening to the Grand Ole Opry with his father, he took classical piano lessons, which ended after he lost part of his right thumb to a work accident as a teenager. He originally trained to be a veterinarian, but after some time in the Navy during World War II took up the guitar.

He became fascinated with Roy Acuff and started playing and writing songs. With his brothers, he played concerts around Virginia. He sometimes wore a buckskin jacket and headband. Rising guitarist Roy Clark worked with Rainwater and together they cut a few demos for 4 Star Records. Pop singer Teresa Brewer turned one of his compositions, “I Gotta Go Get My Baby”, into a big hit. Others were overdubbed and released on budget record labels.

Rainwater was one of country’s most noteworthy stars in the late 1950s, when his good looks and baritone voice made him popular. One of the first country songs he recorded was “Gonna Find Me a Bluebird”, which he wrote. Released in 1957, the song became a big country-pop crossover hit, making Rainwater among the first country singers to appeal to a pop market. The song reached No. 5 on the country chart and 18 on the pop chart. It sold one million copies by 1957, and gave Rainwater his first gold record. During the song’s success, Rainwater relocated to the New Jersey-New York area.

Rainwater got his big break in the music business when he performed on Arthur Godfrey’s programs. He won first place on Arthur Godfrey’s Talent Scouts on May 9, 1955. He had a regular role on ABC-TV’s Ozark Jubilee for several years in Springfield, Missouri beginning in 1955. He signed with MGM Records and recorded a series of songs for the label, including peppy numbers like “Hot and Cold”. Such songs were showcases for Rainwater’s voice, and his energy and versatility led him to record rockabilly.

In the 1970s, Rainwater developed throat cancer, from which he slowly recovered, and moved to Aitkin, Minnesota. He appeared occasionally at rockabilly festivals in Europe and was still loved by many fans.

Rainwater was the 73rd inductee into the Rockabilly Hall of Fame.