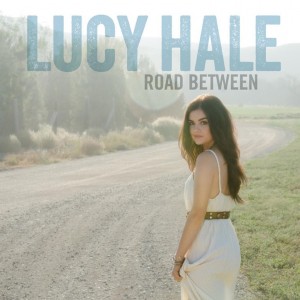 A lot of people know Lucy Hale from her role as Aria Montgomery in the television series Pretty Little Liars. The actress recently released her first album, “The Road Between”.

The album was produced by Mark Bright and Mike Dailey. There is a song Kacey Musgraves had a hand in writing; a song that Joe Nichols sings on, and even one that Lucy co-wrote. On this album, you will find love songs, break-up songs, songs about life, songs that tell stories, and songs that you can relate to.

I’m not going to give you a ‘track-by-track’ review of all 11 songs. But there are a few I want to talk about. “From the Backseat” is one of my favorites. Not the melody, or the tempo, but the story. It tells you that you can really learn a lot watching how people treat each other. The song talks about how the people in the front seat could see the road ahead better than the ones in the backseat could; the front seat passengers could touch dials and controls. But, from her spot in the backseat, she learned about how much they loved each other. And, how they showed each other that love.

Joe Nichols joins Lucy on the song, “Red Dress”. This is a love song, but seems to be more about looking back at the things a couple is remembering in their relationship. Even though it’s obvious they are still a couple, and this isn’t about one of them walking out on the other one, it’s still more about remembering than about what is going on right now. It’s up-tempo, it’s catchy, it’s a fun song.

“Just Another Song” is the last one on the CD. It is one that Lucy co-wrote. I don’t know how much input she had, but it made me wonder why that was the only one she co-wrote. It’s a good song, much different than the others on the album. It’s a slow, sad, song about ending a relationship. It isn’t a sassy, fun, break-up song, like you will hear with “Goodbye Gone”. In that one, you hear not only about breaking up, but about the freedom you have after the breakup happens.

The title track, “Road Between” Is my very favorite on the entire album. It’s about life. It’s about where we’ve been, where we’re going, and what’s in between. The bad parts, the good parts, the breaking down, the writing my story, winning, losing, from the start to the end, still learning what’s in between. I love this one. Melissa Peirce and Mike Daily seem to have taken everything that everyone of us goes through in life and put it in one song.

One song that seems to be about every woman out there is “Nervous Girls”. All women have different problems, different thoughts, different dreams, different ideas – but by the time you get to the end of the song, you realize that we really aren’t that different at all.  The lyrics are thought provoking. While this isn’t a song I expect to hear on the radio, it is a good addition to the album.