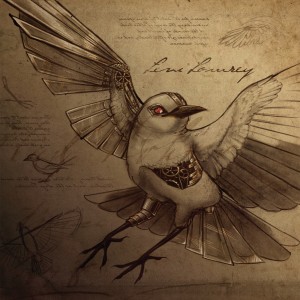 Anyone who is a fan of the Zac Brown Band might be familiar with the name Levi Lowrey. Levi co-wrote the Zac Brown hit, “Colder Weather”. On Feb. 25, 2014, Levi will release his self-titled, sophomore album through Zac Brown’s Southern Ground Artists.

I first heard Levi when he opened for Zac Brown Band in Kingsport a few years ago. I enjoyed his performance. But somehow, he then fell off my radar, and I lost contact with this great artist. I am glad he is back on my playlist. While Levi may not be your typical country artist, he definitely gives us some of the best country music you will ever hear. His sound and writing have been described as ‘one of a kind,’ and you don’t have to listen long to know that is true.

As I listened to the new album, I found myself getting into the lyrics more than I usually do. The songs make you think, and you just know how much the words mean to the writer. When you get to the end of a song, you are probably going to want to start that same song again, to study it, and learn it, and really listen to it before moving on to the next one.

“December Thirty-One” is one of my favorite songs on this album. This song isn’t just about Dec. 31. It’s about Dec. 31, at 11:59 p.m. We’ve all been there. One year is ending, a new year is about to begin. There’s a lot to look forward to, and there’s a lot to remember. When you couple memorable lyrics with a great melody, you have a hit record. I would love to hear this one on country radio. I have no idea what Levi’s plans are for putting a single out on country radio, but this is the one I would like him to consider.

There are 15 tracks on this album, with a total time of a little more than an hour. When you think you’ve heard the best one, you probably haven’t. Because when the next song begins, you will find out it is just as good as the one you just heard - and is some cases, even better.  Out of all the songs, the last one, “War Pigs,” is the only one I didn’t think fit with the rest of what Levi had to offer. It’s fast, it’s loud, it is a little weird. “War Pigs” is the only song I will probably not listen to over and over again. I know there are people who are going to love that song. But I believe, to thoroughly enjoy 14 out of 15 songs on a CD is quite an accomplishment for the artist.

“When it comes down to the end, are you living, my friend – of just trying your best not to die?”. That is a question Levi asks in the third track, “Trying Not To Die”. Every song on this album gives you something to think about. And you are going to relate something you hear, to something you’ve done, or something that has happened sometime during your life.
The 15 songs you will get on Levi’s album are Picket Fences, December thirty-One, Trying Not to Die, High and Lonesome, That is All, Before the Hymnal Died, I’ve Held the Devil’s Hand, Urge For Leaving, Window Pane Soul, What She Don’t Know, Barely Getting By, Don’t Blame Me, Long Way Home, Flywheel and War Pigs.

All of the songs, except one, are original, and the CD features Levi working with a lot of guest musicians. Clay Cook, from Zac Brown Band; Ross Holmes, fiddler for Mumford and Sons/Cadillac Sky); and Oliver Wood from The Wood Brothers all help to make this album what it is. Ad Mac McAnally, performer, producer and Nashville Songwriters Hall of Fame inductee to that list, and of course the fact that the album was produced by Zac Brown, and co-produced by Matt Mangano and Clay Cook, and there is no way this new project is going to be anything but great listening.

This is an album that belongs in the collection of every country music fan. It is one of the best albums I’ve heard in a long time. We’ve got an artist here who has produced 15 songs, and not one of them sounds like rock, pop or rap.
You can keep up with all the news about Levi on his web site, www.levilowery.com, and follow him on Twitter @levilowrey. And remember, for all of your country music news and reviews, visit our site, www.countryschatter.com, and follow us on Twitter @countryschatter.