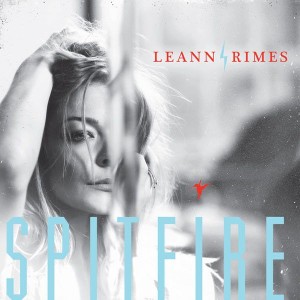 LeAnn Rimes, who rose to stardom at age 13 when her single “Blue” hit country radio, has recently released her 15th studio album, Spitfire. She was named Academy of Country Music Top New Female Vocalist in 1996, and also won the ACM Single of the Year award for “Blue.” In addition to her ACM awards, LeAnn has eight Grammy Awards. Her last Grammy win was in 2008. She is hoping her latest album, Spitfire, will get her back on the radio, and back on the country music charts. Country music fans know that LeAnn Rimes has had more than a bit of turmoil in her life.  For a time the media didn’t seem to want to leave her alone. Her fans have watched her grow up, marry, divorce, become involved in a scandal and remarry. From the song titles on this CD, it would appear LeAnn has decided to use a little of her troubled past to her advantage. A lot of what she has lived through can be heard in the songs she is now singing. Listed with the writers, here are the songs that you will hear on the new album: “Spitfire”, LeAnn Rimes, Darrell Brown and David Baerwald; “What Have I Done” with Alison Krauss and Dan Tyminski, Rimes, Brown, Baerwald; “Gasoline & Matches” with Rob Thomas and Jeff Beck, Buddy Miller, Julie Miller; “Borrowed,” Rimes, Brown, Dan Wilson; “You Ain’t Right,” Liz Rose, Chris Stapleton, Morgane Hayes; “I Do Now,” Rimes, Brown, Wilson; “Where I Stood,” Missy Higgins; “You’ve Ruined Me,” Rimes, Brown, John Shanks; “Bottle,” Gary Burr, Christina Aldendifer; “A Waste Is a Terrible Thing to Mind,” Rimes, Brown, Baerwald; “Just A Girl Like You,” Rimes, Brown, Nathan Chapman; “God Takes Care of Your Kind,” Rimes, Brown, Dean Sheremet, and “Who We Really Are,” Brown, Sarah Buxton. LeAnn has a lot of diversity in her vocals. When going from one song to the next, she has the ability to change from a raspy and rowdy voice to a sweet and melodious tone. Listeners really don’t know what to expect when one song ends and the next begins. Finding a favorite song on this album was a little difficult for me. That was because the lyrics I liked the best were to the song “Bottle.” That song gives us lines like ‘My heart is like a bottle with the world inside, I couldn’t fit more happy in it if I tried’. However, the melody I liked the best belonged to the song “What Have I Done”. It has a slow, quiet, calming melody and is very easy to listen to. The whole album is good, and I’m sure it will be receiving the highest ratings from any of country music’s reviewers. LeAnn still keeps a packed schedule, with concerts throughout the U.S., and shows scheduled for September in Switzerland and the United Kingdom, and a show in Taipei City, Taiwan, planned for November. You can keep up with LeAnn’s tour dates, news, and upcoming single releases by visiting her website www.leannrimesworld.com. She has a Twitter account, too, and you can follow her @leannrimes.