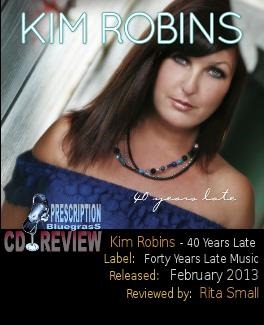 It appears that Kim has spent her time not only honing her craft, but also finding her voice and knowing exactly who she is as a singer.

You will not hear someone trying to imitate other female singers, or singing in the rafters, on this recording. Instead, you will hear a woman with a mid-range, bluesy, voice that puts you in the mood for some good traditional bluegrass and classic country.

Kim has surrounded herself with an ensemble of, to say the least, solid musicians. Appearing on the project are Don Brummett, Michael Cleveland, Mike Curtis, Jeff Guernsey, Nathan Livers, Lynn Manzenberger, Seth Mulder, Butch Robins, Mark Stonecipher, and Richard Torstrick. Providing harmony vocals throughout the project are fellow Indiana residents Misty Stevens, singer, songwriter, and leader of her own band, and Kent Todd, singer and fiddle player with Blue Mafia.

The title cut of this project, written by Kim, is so well penned that many listeners will easily relate to the song. The lyrics of this song are honest and will hit home with, not only singers that are chasing the dream of success later in life, but also everyone that has had to put their dreams on hold for other choices.

While I cannot pick one song to call my favorite, because I actually have quite a few on this project, I enjoy Kim’s upbeat tribute to Connie Smith with “I’ve Got My Baby On My Mind”. Kim states that she spent many hours trying to imitate Smith’s voice until her Dad told her to “sing like yourself”. Advice many singers should follow and advice I am glad Kim took.

Another song on the project that caught my attention is the duet “The Last Thing On My Mind” that Kim performs with Jeff Guernsey. While many artists have recorded this song, Kim and Jeff’s voices complement each other so well, that I found myself replaying this tune numerous times and just enjoying the harmony.