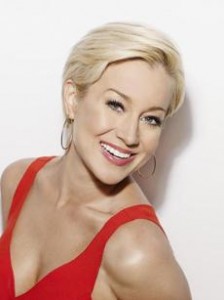 NASHVILLE, Tenn. – Just one week from today, Kellie Pickler will release her fourth studio album, The Woman I Am, on Monday, November 11, 2013. The album, produced by Luke Wooten and Frank Liddell, contains 12 new songs including her current single “Little Bit Gypsy.”
In anticipation of the release, fans are now able to pre-order digital versions of The Woman I Am on iTunes,  and will automatically receive a digital download of Pickler’s current single, “Little Bit Gypsy,” with their purchase.
Pickler co-wrote three of the songs, including the title cut which she wrote with her husband Kyle Jacobs. The Woman I Am is her first album for her new label home, Black River Entertainment, and her follow up to 100 Proof, which Rolling Stone named as the No. 1 Country Album of 2012.
“I can’t wait for my fans to hear this music,” said Pickler. “It is pure ‘Kellie Country’ and may be the most ‘me’ album that I’ve created yet.”
Pickler will celebrate “Country Music’s Biggest Night” by presenting an award on “The 47th Annual CMA Awards” this Wednesday, Nov. 6 (8:00-11:00 PM/ET) on ABC Television.
The reigning Mirror Ball Trophy winner is looking forward to returning to ABC’s “Dancing with the Stars” on Monday, Nov. 11 to sit in the audience and cheer for all of this year’s contenders. After the show, she will have the opportunity to celebrate her recent American Country Awards nomination for Music Video of the Year: Female for “Someone Somewhere Tonight” with former dance partner Derek Hough who co-starred with her in the video.
On Wednesday, Nov. 13, Pickler will perform on both the syndicated “The Ellen DeGeneres Show” and CBS Television’s “Late, Late Show with Craig Ferguson.”
Later in the month, Pickler will perform on ABC Television’s “The View” on Tuesday, Nov. 26. Announced earlier today, Pickler will ride a float and perform in the Macy’s Thanksgiving Day Parade on Thursday, Nov. 28, which airs live on NBC Television. And, she will help everyone get into the holiday spirit when she performs on “CMA Country Christmas,” airing on Monday, Dec. 2 on ABC Television.
Fans have already begun pre-ordering autographed copies of The Woman I Am in a variety of bundled packages at www.KelliePickler.com.
The twelve songs on The Woman I Am are:
1. “Little Bit Gypsy” (Kyle Jacobs, Tammi Kidd Hutton and Fred Wilhelm)
2. “Ring for Sale” (Chris Stapleton and Jim Beavers)
3. “Buzzin'” (TJ Osborne, John Osborne and Steve Moakler)
4. “The Woman I Am” (Kellie Pickler and Kyle Jacobs)
5. “Closer to Nowhere” (Carson Chamberlain, Wade Kirby and Phil O'Donnell)
6. “Selma Drye” (Kellie Pickler, Billy Montana and Phillip Lammonds)
7. “I Forgive You” (Busbee, Hillary Lindsey and Aimee Mayo)
8. “Bonnie and Clyde” (Kellie Pickler, Kyle Jacobs and Liz Rose)
9. “Where Did Your Love Go” (Kalisa Ewing and Rivers Rutherford)
10. “No Cure for Crazy” (Kyle Jacobs, Joe Leathers, Billy Montana and John Ozier)
11. “Tough All Over” (Gary Nicholson and Leslie Satcher)
12. “Someone Somewhere Tonight” (Davis Raines and Walt Wilkins)
For tour schedules and more information, visit www.KelliePickler.com.  Follow her on Facebook at www.Facebook.com/KelliePickler, on Twitter @KelliePickler, and now on Instagram at instagram.com/kelliepickler.