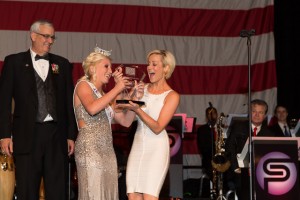 RALEIGH, N.C. – – Country music singer Kellie Pickler was presented with the Heart for the Warrior Award from the USO of North Carolina on Saturday, Oct. 19 at the Ninth Annual Salute to Freedom Gala in Raleigh, N.C.  The award is given to those who, through their selfless service and contributions, continuously lift the spirits of the troops and their families.

Pickler, an Albemarle, N.C. native, participated in her first USO tour in 2007. Since then, she has performed for more than 30,000 troops stationed in eight different countries.
“I am so honored to be here,” said Pickler during her acceptance speech. “I am so blessed to have such a beautiful friendship with the people that make up the USO.  I come from a military family. I’ve always had a great deal of respect for our service men and women. I work a lot with the USO, I love working with them. 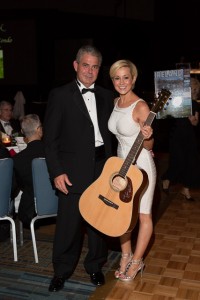 We’ve been able to do so many tours overseas. To be in a position where you can take a little piece of home to your service men and women, why would you not do that? They need to know we have their back because they have ours.”
The Gala honored service members and people from the community who support America’s military heroes. As part of the evening’s festivities, the USO of North Carolina held a live auction which included a signed guitar from Pickler. The winning bidder was Frank Stewart, who paid $4,900 for the guitar.  In total, the Live Auction raised $81,550.
The Black River Entertainment recording artist will release her fourth album, The Woman I Am, on Nov. 11.  The album, which features her current single, “Little Bit Gypsy,” is available now for pre-sale orders at www.KelliePickler.com. Pickler will also perform on “CMA Country Christmas,” which will tape in Nashville at the Bridgestone Arena on Nov. 8 and is scheduled to air on the ABC Television Network on Dec. 2.