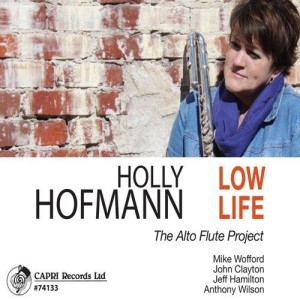 Veteran flautist Holly Hofmann recently participated in two adventuresome recordings. She appears as soloist on Ali Ryerson’s Game Changer, a CD of music performed by a band of flautists (nineteen of them, including guests) plus rhythm section. Hofmann plays C flute on this 2012 release. (A review is available at http://www.musicchartsmagazine.com/ali-ryerson-game-changer-review-by-benjamin-franklin-v-of-music-charts-magazine-tm/.) The other session is one she led. Apparently recorded in 2013 (I say apparently because the CD identifies the recording date as 18 December 2014, which has not yet arrived), Low Life showcases Hofmann with a trio (sometimes a quartet) and playing alto flute exclusively.

Though C flute is her primary instrument, Hofmann has featured alto flute occasionally. The latter has a mellower sound and more limited range than the former. As a result, performances on alto flute typically convey warmth and avoid displays of virtuosity. A complete CD of such music risks causing boredom because of sonic uniformity.

Hofmann attempts to solve this problem in various ways: by playing unison lines with guitarist Anthony Wilson, who appears on four selections and who wrote one of them, “Jack of Hearts”; by soloing only with the accompaniment of pianist Mike Wofford; by letting others solo, especially Wilson and Wofford; by adding a percussive element by having drummer Jeff Hamilton engage in four-bar exchanges with other instrumentalists; and by performing at various tempos, from the slow “The Very Thought of You” (the only standard played here) and her own “Lumière de la Vie” to the middle-groove “Cedar Would,” composed by bassist John Clayton, and the funky “Soul-Leo,” by the late pianist Mulgrew Miller. In other words, she did all she could to add texture to her music.

An interpretation of Pat Metheny’s “Farmer’s Trust” concludes the CD. Hofmann declares that she recorded this piece because her live performances of it moved some listeners to tears. Her lovely and emotional version of it on Low Life makes her claim believable.  She states the melody and is the only soloist, though Wilson is much in evidence, both when performing in unison with her and when playing behind her solo.

Hofmann creates appealing music throughout this CD. The question becomes: Should she record another alto flute album? This is up to her and her producer, but I think that unless she can conceive of additional ways to add variety to her performances she might best be advised to feature the instrument on a track or two on subsequent releases and let Low Life stand as her sole but impressive all-alto flute album.