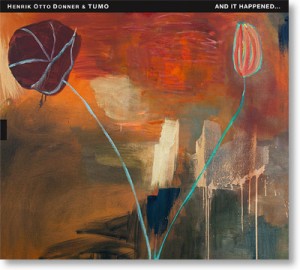 Title = And It Happened

Recorded in Helsinki in 2012, this CD features the compositions of Henrik Otto Donner (1939-2013), a Finn who wrote prolifically in various genres and was a respected trumpeter. Performed by the orchestra TUMO (Donner conducts the strings; Mikko Hassinen leads the other musicians), the pieces on this release primarily create mood, which is frequently tranquil. Occasionally, though, there are emotional outbursts that, when played by the brass, remind me of the shrieking trumpets and trombones of Stan Kenton’s extroverted band. This is especially evident on the title track. The difference between Donner’s and Kenton’s use of blaring sound is that Donner incorporated it for contrast (the wildness near the end of “And It Happened” subsides and the performance concludes with a musical whisper), while Kenton employed it so commonly that its excessiveness came to characterize his group’s sound. Additionally, Donner’s music is modest in the sense that it often serves less as an end unto itself (drawing attention to itself) than as a setting and inspiration for the major soloists, in this case tenor saxophonist Juhani Aaltonen (a collaborator of Donner since the 1960s) and vocalist Johanna Iivanainen.

A fixture on the Finnish jazz scene since the 1950s, Aaltonen is a marvel. Not only does he play masterfully—both sensitively and passionately, as appropriate–but his solos belie his age: at the time of this recording, he was past his mid seventies. I have not heard many soon-to-be octogenarian instrumentalists express such emotional breadth and depth, though this quality of playing would impress if played by someone far younger than Aaltonen. He does justice to Donner’s compositions. For an example of his current work as leader, I recommend To Future Memories (2010), a sextet session issued recently by Finnish TUM.

Though English is not Iivanainen’s first language, the Finn could possibly be mistaken for a native speaker because she shows only the slightest hint of accent. In fact, many singers could learn something valuable from her: the importance of enunciation. When she performs, every syllable is easily understood. Why sing lyrics, which exist to tell a story, if they cannot be fully comprehended, as is too often the case? She communicates a story.

Of the eight selections on this CD, two in particular surprised me: “These Are the Days” and “For Friends and Relatives.” The first is a musical rendering of a poem by Emily Dickinson (my favorite from among her creations), with the words sung by Iivanainen and featuring Aaltonen on alto flute and Kasperi Sarikoski on trombone. As straightforward and attractive as this performance is, I cannot determine if it suggests what I think is the meaning of the poem: the skeptical speaker’s desire to possess an innocence that would permit her to gain salvation by uniting with Christ through Holy Communion. If Donner and the musicians intended not to interpret the poem but merely to make lovely music behind the vocalist, they succeeded. Donner’s first recorded composition (1963) and the jazziest performance on the CD, the second tune surprises because the beginning of its melody (after the few bars of fanfare) seems inspired, to a degree, by the music of Charles Mingus, including a fragment from “Ecclusiastics,” recorded the year before the initial recording of “For Friends and Relatives.” Perhaps Mingus is one of the friends alluded to in the title.

In sum, And It Happened serves as a good introduction to Donner’s writing, Aaltonen’s playing, Iivanainen’s singing, and an aspect of the recent Finnish jazz scene.

Note: Donner wrote the “Close Your Eyes” that is performed on this CD; it is not Bernice Petkere’s popular tune of this title written in the 1930s.