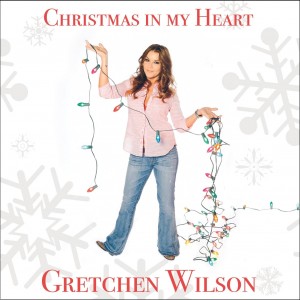 Department stores all over the country have already let us know it is not too early to start thinking about Christmas. For those of you who like listening to Christmas music sooner than the week of Christmas, the new holiday albums started coming out early in October. One of my favorite new albums comes to us from Gretchen Wilson, and is called “Christmas in My Heart”. While the album does contain the Christmas carol “Silent Night”, the other nine are Christmas songs, not traditional carols, and include the title track, “Christmas in My Heart,” “Santa, I’ve Been Naughty,” “Have Yourself a Merry Little Christmas,” “If You See Rudolph,” “Nuttin’ For Christmas,” “Have a Holly Jolly Christmas,” “Christmas Song,” “I Want a Hippopotamus for Christmas,” and “Blue Christmas”. Seriously, how can you not love an album with the ‘hippopotamus’ song on it!

This is the first Christmas album from Gretchen, who introduced the world to her “Redneck Woman” side in 2004. It took a song like “Redneck Woman” for the country music world to notice Gretchen. However, that song did nothing to show us how talented she really is. “Redneck Woman” was a catchy tune with lyrics that seemed to please not only the folks in the south, but everyone who listened to country music, no matter where they lived. Since that time, Gretchen has released four studio albums, one live album, and two compilation albums (Greatest Hits and Playlist: the Very Best of Gretchen Wilson). The 20 singles she has released over the years were slow, fast and mid-tempo, and gave fans an opportunity to listen to her vocals, and discover she was far more talented than her performance of ‘Redneck Woman” might have led them to believe.

On the new album, she turns the Elvis hit, “Blue Christmas,” into a very bluesy number, and probably the only song on the CD that comes close to what could be called country music. “Christmas in My Heart “is the sweet song you might expect it to be with a title like that. She sings “Silent Night” the way it was written, and once again gives us an opportunity to hear that her vocals are not only powerful, but beautiful.

When you listen to her rendition of “The Christmas Song,” it will be very easy to close your eyes and picture the fireplace, over-stuffed furniture, a crowded room, and a very large piano. She does this entire number accompanied only by a piano, and this arrangement includes a nice piano solo in the middle. Mixed in with the traditional holiday tunes, you will find three original songs, written for Gretchen for inclusion in her first Christmas album. Those songs are “If You See Rudolph” written by Trent Willmon, Jenee Fleenor and Rob Byus, “Christmas in My Heart,” written by Greg Barnhill, and “Santa I’ve Been Naughty,” written by Rob Simbeck and Frank Michels. Check out Gretchen’s facebook page, and follow her on Twitter @gw27.