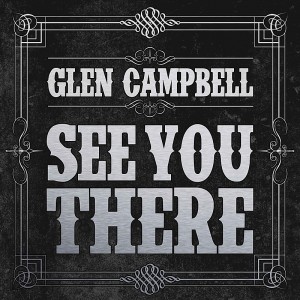 Though his voice is weaker, and the musical arrangements a little different than what we remember, Glen Campbell is still bringing us the best he has to give. His new album, “See You There,” could be the last for one of country music’s most popular artists.

During his career, which has be going strong for more than 50 years, the country music singer, guitarist, television host, and sometimes actor has been involved in nearly every aspect of the business. He even hosted his own variety show on CBS from 1969 to 1972.

Diagnosed with Alzheimer’s in December 2010, the 77 years old recently canceled the remaining dates on his Farewell Tour, stating the reason that his disease was worsening. But somewhere in the midst of all that, Glen recorded a new album for us.

“See You There” gives us 12 songs, including some of his most famous, and some new ones. “Gentle on My Mind” will always be one of my favorite Glen Campbell songs. While you can find videos on YouTube, they are just the song, with pictures of Glen appearing where the video should be. If there was ever an actual music video done to this song, I haven’t been able to find it. Written by the late John Hartford, this song would have made a wonderful music video. There is a whole movie in the three minutes of great melody with story-telling lyrics.

Fans who remember Glen for songs like “Galveston,” “By the Time I Get to Phoenix”, “Wichita Lineman,” and “Rhinestone Cowboy” won’t be disappointed. Those songs are all on the new album. But, Glen didn’t just pull them out of his collection of recorded music and include them on this CD. He recorded them again. This time, the songs are missing the vibrant orchestration that they had before, but they do seem to be more personal. “By the Time I Get to Phoenix,” is now little more than an acoustic performance, and it’s beautifully done.

Glen co-wrote “There’s No Me…Without You,” with Julian Raymond for the 2011 album “Ghost on Canvas”. That album also included “I Wish You Were Here” and “What I wouldn’t Give” as bonus tracks. The song “Waiting on the Comin’ of My Lord,” is on the album twice. The first version is just Glen, with a little bit of instrumental accompaniment and a touch of added harmony by an unnamed artist. The second version, which is the final song on the album, features Jose Hernandez and Mariachi Del Sol De Mexico.

Here are the 12 songs on Glen Campbell’s new “See You There” album, which released on Aug. 13, 2013. “Hey Little One,” “Wichita Lineman,” “Gentle On My Mind,” “Postcard From Paris,” “Waiting on the Coming of My Lord,” “What I Wouldn’t Give,” “Galveston,” “By the Time I Get to Phoenix,” “There’s No Me… Without You,” “True Grit,” “Rhinestone Cowboy,” and “Waiting on the Comin’ of My Lord, featuring Jose Hernandez and Mariachi Del Sol De Mexico.

Even though Glen’s touring days have come to an end, and it seems like more than a possibility that “See You There” will be his last album, the entertainer is still very much involved with his fans. His website is still active and includes all the updated news and information fans would want about things Glen is doing now. The web site is www.glencampbell.com, and he can be followed on Twitter @GlenCampbell.

CountrysChatter.com and MusicChartsMagazine.com – Your entertainment destinations –