LEOGANE, Haiti, Nov. 28, 2012 /PRNewswire/ — Country music stars Garth Brooks and Trisha Yearwood returned to  Leogane, Haiti, to participate in Habitat for Humanity’s 29th annual Jimmy and Rosalynn Carter Work Project. They were among the nearly 600 volunteers who helped to build 100 homes in the Santo community in partnership with families affected by the 2010 earthquake. 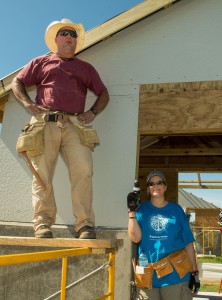 The 7.0-magnitude earthquake that struck Haiti in January 2010 caused widespread devastation, destroying 105,000 homes. Habitat for Humanity’s Carter Work Project has focused its efforts in 2011 and 2012 on helping rebuild homes and bring attention to the ongoing support needed for Haiti’s recovery.

About Habitat for Humanity International

Habitat for Humanity International is a global nonprofit Christian housing organization that seeks to put God’s love into action by bringing people together to build homes, communities and hope. Since 1976, Habitat has served more than 500,000 families by welcoming people of all races, religions and nationalities to construct, rehabilitate or preserve homes; by advocating for fair and just housing policies; and by providing training and access to resources to help families improve their shelter conditions. For more information, to donate or to volunteer, please visit www.habitat.org, or follow us at www.facebook.com/habitat or at www.twitter.com/habitat_org or join Habitat’s blog community at www.habitat.org/blog.