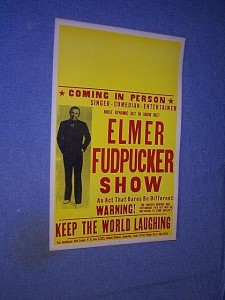 A Historical Interview with

- Don't Miss It.  Listen to this Exclusive Interview below! -

Hollis Champion began his recording career as "Hollis Champion" in the late 1950s when he recorded "Old Red Devil." Then he moved to Nashville in the early 1960s, developed a flare for comedy and adopted his flashy stage name, Elmer Fudpucker.

Over the years appearing as Elmer Fudpucker, Hollis has been the opening act for such diverse performers as Jerry Lee Lewis, James Brown, Kenny Rogers, the Statler Brothers and Marty Robbins. His first break in the business came when Ernest Tubb asked him to open performances at fairs for him.