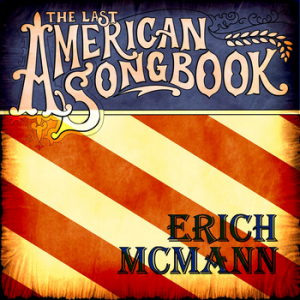 If you have ever read any of my CD reviews, you know that I am a huge fan of traditional country music. I get very excited when out of the crowd of very talented musicians we have in this world, a real country artist emerges. That doesn’t happen often any more. But, it does happen from time to time. When it does, I want to tell you all about it. Today, I found Erich McMann.

Erich’s album, “The Last American Songbook” was quite a surprise. While I still don’t like the direction country music is going, I’ve grown to expect it. It seems that country/pop, country/rock, and country/rap are going to be part of the country music scene whether we old folks like it or not. So, try to imagine the huge smile that came across my face when I popped this great CD into my computer this afternoon.

I couldn’t say it any better than the artist did, so I’m going to share his words with you. “This album is an audio snapshot of America, it’s people, music, and culture. Written in a week, recorded in a day, it explores the diverse sonic landscape of Americana through traditional country, western swing, cowboy, folk, trucker, honky tonk and roots music genres,” Erich McMann wrote.

“Inspired by the sights and sounds encountered on a road trip to America’s Heartland, the songs reflect my personal experience as an artist and an American through this journey,” Erich added.

Erich is from the Midwest, born into a musical family. He began picking the guitar at an early age. He said growing up on a farm in the heartland of America exposed him to country music through cross-over country hits on AM radio, and atching Buck Owens’ on “Hee Haw” every Saturday night on television. It was a girlfriend’s father that introduced him to Hank Williams work, and soon after that, Erich began writing and recording.

In 2013, the song “Keep Me Loving You” was nominated for “Song of the Year”  by the Academy of Western Artists.

There is not a bad song on the album. You won’t want to be doing anything else when you are listening to this music. You will want to listen to every word, and see where he is going with the story. I hear a lot of old country coming out in Erich. It was nice to get that back. I’m certain people from my generation are going to fall in love with this music. I hope some of that will reach our younger fans, too. There is a lot of country music they’ve been missing out on. The music is good, the vocals are good. Erich was born to sing country music.

This album is available for free download, by visiting www.erichmcmann.bandcamp.com, and entering a price of zero. If you are a fan of real country music, I know you will enjoy this album as much as I do.

Erich doesn’t have a web site as yet, but keep reading countryschatter.com, and we’ll put up any news we get about him. If you aren’t following us on Twitter, we’d love to have you. You will find us @countryschatter.​